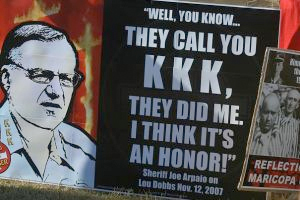 When Arizona Gov. Jan Brewer signed the nation’s most draconian immigration law last week, criminalizing illegal immigration (and, many critics say, being a minority), she had a good political reason for doing so: Joe Arpaio.

Joe’s the aging sheriff of Maricopa County, Arizona (which includes Phoenix), and his disdain for brown people, civil liberties, federal authority, and Constitutional law are pretty well documented at Mother Jones and elsewhere. A man with a Pravda-esque communications machine that would be the envy of any politician on any level, he lords over Maricopa’s swelling prison population with the swagger of an antebellum South Carolina planter driving his slaves. He’s made prisoners wear pink panties, stuck them in sweltering tents in the desert, screwed with their food rations, cited fake laws, gone after news reporters, and generally made nativism the reason for his existence on this heavenly sphere.

He made arresting Latinos fashionable and, after many run-ins with the feds over such practices, was likely the main inspiration behind Arizona’s new immigration code. In short, Brewer felt she had to sign last week’s immigration bill, because she felt Arpaio’s breath on her neck. She had to appear as tough on brown people as Arpaio does, lest he decide to challenge her in the GOP primary.

So she signed it. And guess what? Arpaio’s still going to run against her. Sources in the sheriff’s department, which will likely double as his campaign staff (no new thing there), say his paperwork’s filed. And on his Twitter account – where you can read about his Washington Post interview today, or his “crime suppression/illegal immigration” operations briefings, or his anger about “out of town critics” – he recently tweeted that his wife wants him to run. And he’s already the frontrunner in Arizona Republicans’ minds.

So why not run? What does he have to fear? Latino turnout in the Phoenix metro area? Problem solved!

Here, then, is to Arizona: one of the prettiest states in the union, soon to be the first breakaway republic in the new confederacy of Inner America.