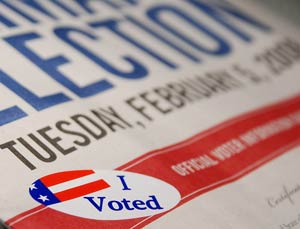 You can learn a lot about a political culture by how it approaches problems that don’t actually exist. For instance, while there’s little evidence to suggest that rehabilitated felons exert an undue influence on our political process, many states have made registering to vote into the rough equivalent of the Tri-Wizard Tournament.

f you’re a former felon living in Mississippi, for example, you have to convince both houses of the state legislature to pass a bill specifically granting you the right to vote in state and local elections. Or, more likely, you won’t even try—which is kind of the point. In Virginia, felons can vote only with the approval of the governor.

But don’t worry, Virginia, because new Gov. Bob McDonnell is on the case. From the Washington Post:

McDonnell (R) will require the offenders to submit an essay outlining their contributions to society since their release, turning a nearly automatic process into a subjective one that some say may prevent poor, less-educated or minority residents from being allowed to vote.

The proposal is kind of absurdly brilliant: McDonnell’s plan to improve the subjective and burdensome application process for felons is to make the process even more subjective and burdensome. He’s also adding in a nifty little quasi-literacy test, which wins bonus creativity points for not only giving the governor more room to reject applicants, but also providing a disincentive to even apply. People act really funny when they’re asked to pay for something they’re used to getting for free (plastic bags, for instance); I imagine they act even funnier when you ask them to craft a five-paragraph essay.

I think it goes without saying that felons have all shown poor judgment at some point in their lives. But good judgment has never been a prerequisite for voting, nor should it: You can vote for “Lizard People” if you like. Heck, you can even vote for Bob McDonnell. I won’t judge.