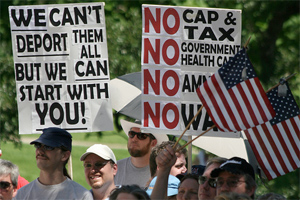 Lest you think that Mother Jones only scrutinizes the missteps of retrogressives in red states like Arizona, Oklahoma, Mississippi, Virginia, Alabama, and South Carolina, Rep. Duncan D. Hunter (R-Calif.) has jumped in to remind America that hating all things vaguely immigrant-related—including US citizens—transcends state borders.

Hunter—not to be confused with his belligerent, anti-immigration dad of the same name, who more or less bequeathed the 52nd congressional district in San Diego to his son two years ago—traded the Beltway for a California Tea Party meeting last weekend, presumably so he could rail against the entitled Beltway elite class. The conversation turned to those durn’d dirty illegals, because there’s no better way to express your solidarity with a bunch of 18th-century British-born colonists than to rail against immigration. Hunter praised Arizona’s new “Papers, please” law to round up undocumented immigrants (or anyone who looks like one), calling it “a fantastic starting point.” But at one point, his red-meat stumping got really raw. According to Talking Points Memo, things got weird during the Q-and-A:

“Would you support deportation of natural born American citizens that are the children of illegal aliens?” a man in the audience asked.

“You can look and say, ‘You’re a mean guy. That’s a mean thing to do. That’s not a humanitarian thing to do.’ We simply cannot afford what we’re doing right now.”

Actually, Duncan, it’s not just a mean thing to do. It’s kind of illegal. And logistically a bit difficult. ‘Cause, you know, where are you going to deport a lifelong US citizen to?

Hunter, who batted for my Navy-Marine Corps team as an Iraq-deployed artillery officer, then explained that “it takes more than walking across the border to become an American citizen. It’s within our souls.”

So now, in addition to carrying your birth certificate and handgun with you in Arizona, you should probably steel yourself for any potential run-ins with the soul police. That’s totally different from the thought police, though. We swear! Scout’s honor!