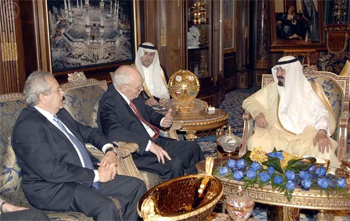 [UPDATED] Foreign Policy‘s David Kenner pointed out Monday that former vice president and ex-Halliburton CEO Dick Cheney just went on a junket to meet with Saudi Arabian leaders, a quiet pow-wow that’s been discussed in the Saudi media but not so much over here. Cheney—who’s been busy defending torture and complaining that Barack Obama lets world leaders “think they’re dealing with a weak president“—weakened the president by visiting a leading torture regime and its caliph, King Abdullah.

So, what was the ex-veep doing in Riyadh?

The obvious answer would be: something financially advantageous. Cheney, who oversaw the Saudi staging of Gulf War I, has always maintained good relations with the kingdom and its elites—relations that certainly came in handy after the war, when his oil-services and all-around shady operation, Halliburton, won lots of US and Saudi contracts to help extract the kingdom’s petroleum wealth—and buttress its national defenses.

But those sorts of financial entanglements—and high-level contacts—can quickly deteriorate into policy interference. Which wouldn’t be new territory for Cheney, who as CEO helped Halliburton skirt international and US terror sanctions on trade with Iran in order to make a quick buck.

If his Saudi expedition is intended in any way to undermine the US administration’s foreign policy—and his track record here isn’t great—then some politicians might argue he’s skirting the law…the longstanding Logan Act, to be exact. Mind you, nobody’s ever been prosecuted under that act, which prohibits private citizens from setting US foreign policy. But just a few years ago, Cheney’s GOP colleagues in Congress constantly used the Logan Act to threaten Democrats like Nancy Pelosi, and even promulgated ethical guidelines on foreign post-employment activities for Republican politicians. (Cheney and fellow GOPers may not have read those guidelines, though, since the link to them seems to be dead.)

Look, it could be nothing. Richard Cheney, whether he’s a nice guy or not, whether he’s right or not, is entitled to his travels and meetings. And he’s probably got a lot more friends in that desert-straddling medieval-style theocracy than he does in these United States. The least he could do is keep his countrymen in the loop. But hey, why start now?