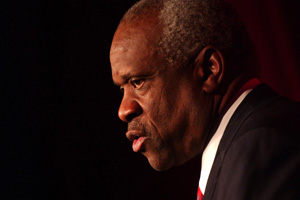 Supreme Court Justice Clarence Thomas was reportedly “completely shocked and outraged” when he learned that his nephew, who suffers from epilepsy and was reportedly suicidal, was beaten and tased with a stun gun at a Louisiana hospital—apparently, for nothing more than some unruly behavior.

“Outraged” we can understand: What happened to 24-year-old Derek Thomas does qualify as outrageous. According to an account on Raw Story:

When the Supreme Court justice’s nephew refused to put on a hospital gown and said he wanted to leave the hospital, doctors ordered security to restrain him.

Security guards “punched him in his lip, pulled out more than a fistful of his dreadlocks and tasered him to restrain him,” a statement from Thomas’ family said.

Still, there’s no reason why Justice Thomas should be “shocked” that such a thing could happen. As one of the nine highest placed individuals in the U.S. Justice system, he should know that these things—and much worse—happen every day to Americans who suffer from mental illness.

Our jails are now the largest mental health facilities in the nation, and they are filled with people who are there because they exhibited behavior common to untreated mental illness, including drug abuse, assault, and “quality of life” crimes. Once in jail, they are likely to further act out and land in solitary confinement—which is of course the worst possible place for them. Derek Thomas was reportedly deemed to be suicidal when he arrived at the hospital. A common “treatment” for suicidal prisoners is, again, placement in solitary confinement, for “their own protection.” Once there, many of these prisoners make every attempt to kill themselves—and some succeed.

As we wrote earlier this week, the St. Tammany Parish Jail in Covington, Louisiana—which is just 50 miles north of the hospital where Derek Thomas suffered his abuse—has come up with a novel “solution” to the problem of suicidal inmates. It places them in 3″ x 3″ cages, half-naked and without bedding, a toilet, or anything else they might use to do themselves in. Some have remained in the cages for weeks or even months. The ACLU of Louisiana is fighting for their release, but have so far been unsuccessful.

Clarence Thomas has yet to protest the torture of St. Tammany Parish’s suicidal prisoners—or of any prisoners at all, for that matter. As New York Times Supreme Court reporter Linda Greenhouse wrote earlier this year, Clarence Thomas has never once sided with a prisoner who claimed violation of the Eighth Amendment’s guarantee against cruel and unusual punishment. This included a case where “a guard had responded to [a prisoner’s] request for a grievance form by slamming him onto the concrete floor and then punching, kicking and choking him until another guard pulled the attacker off,” and another where an inmate “had been handcuffed to a hitching post and left to stand shirtless in the sun for seven hours without water or bathroom breaks.” Thomas has said that the framers of the Constitution “simply did not conceive of the Eighth Amendment as protecting inmates from harsh treatment.”

To our knowledge, Justice Thomas also has never spoken out in any way about the suffering of the mentally ill in the United States, whether in prisons and jails, in genuine mental health facilities, or on the streets, where millions of homeless mentally ill people live out their lives.