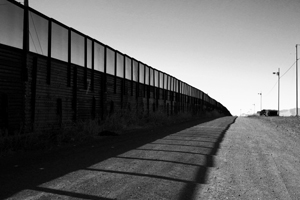 Hours before it was set to take effect, a federal judge blocked some of the most controversial parts of Arizona’s harsh immigration law, issuing an injunction applauded by its opponents. But starting Thursday at midnight, there will still be a slew of anti-immigration measures that will take hold in the state. And it’s only the beginning of the political and legal firefight surrounding the law.

In her decision on Wednesday, US District Judge Susan Bolton blocked parts of the law that would have required police to determine the immigration status of everyone they stop and suspect to be in the country illegally, saying that the measure could cause “irreparable harm” if they were implemented. “Even though Arizona’s interests may be consistent with those of the federal government, it is not in the public interest for Arizona to enforce preempted laws,” Bolton wrote in her injunction. The ruling also prevents Arizona from enforcing provisions making it illegal to be caught without immigration documents and allowing the arrests of suspected illegal immigrants without a warrant.

Bolton still has to issue a final ruling as to whether to strike these provisions of the law down, and Arizona officials are expected to appeal the injunction immediately. But immigration groups who’ve opposed the law, commonly known as SB 1070, have already hailed the decision as a major victory. Greg Chen, director of advocacy for the American Immigration Lawyers Association, described the ruling as a “signal that the judge understood how damaging SB 1070 would be if its most problematic components go into effect.”

Bolton’s decision came in response to the Department of Justice’s challenge to the Arizona law, which argued that the measure preempted federal authority on immigration law. A slew of civil rights groups, including the ACLU, had also challenged the law on the basis that it legitimized racial profiling. But the judge’s injunction on Wednesday only made reference to the federal government’s lawsuit—and the rationale for blocking these parts of the law was a vindication of the Obama administration’s decision to sue on preemption instead of racial profiling grounds. Bolton’s injunction is also likely to have a chilling effect on the growing number of states and municipalities that have threatened to pass copycat laws.

There are still some parts of the law that Bolton had left in place—despite being challenged by the federal government—and which will go into effect as scheduled, including a human smuggling provision that makes it a crime to “transport or harbor” illegal immigrants. Chen says such measures are still “problematic,” with Arizona residents voicing concerns that the smuggling section of the law might criminalize sleepovers and carpools with illegal immigrant children. The climate of fear that the impending law created has already led immigrants to flee the state before the law took effect. One Arizona immigration attorney, Mo Goldberg, told Mother Jones that even legal residents have consulted him about being persecuted for “being complicit in the crime of transportation or smuggling” if they helped friends who were illegal immigrants leave the state.

The judge’s injunction is just the first step in the protracted legal battle that’s likel come, with legal analysts like CNN’s Jeffrey Toobin already predicting that the case could head to the Supreme Court in the near future. The decision will certainly fan the flames of the conservative opposition that’s organized in defense of the law. Both Sen. John McCain (R-Ariz.) and his primary opponent, JD Hayworth, issued strong rebukes of the judge’s decision. Even before Bolton issued her ruling, the Tea Party Patriots issued a blast encouraging its activists to “stand with Arizona tomorrow” by holding “sign waving events” for one hour on Thursday.

“This is another example of why activist judges are such a problem in this country,” says Mark Meckler, a co-founder of the Tea Party Patriots, who says the protests will go ahead as planned, “probably in increased numbers.” When tea party activists haven’t always embraced anti-immigration causes, Meckler suggested that Arizona had pushed the two movements together. “Tea Party Patriots will support our 2,400+ chapters, and the majority of the American public in their belief that this law is not only Constitutional, but desperately needed in a dangerous environment where the federal government has openly and notoriously abandoned its own citizens.”