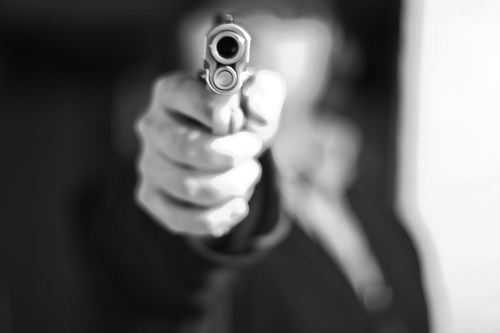 Should students be allowed to carry concealed weapons on college campuses? Yesterday, the question entered the national limelight after a 19-year-old University of Texas student fired four rounds through the campus with an AK-47 before killing himself. No one else was hurt, the Associated Press reports. But the incident has Texas Gov. Rick Perry—a dude who goes jogging with a loaded pistol—calling for a relaxation of the state’s gun-free college laws. He told the AP:

There are already guns on campus. All too often they are illegal. I want there to be legal guns on campus. I think it makes sense—and all of the data supports—that if law abiding, well-trained, backgrounded individuals have a weapon, then there will be less crime.

It’s a stock argument for pro-gun partisans: Students and faculty with concealed carry permits need the ammo to shoot back if a crazed gunmen enters their school. But a 2002 Violence Policy Center study found that sometimes, just sometimes, even the people permitted to carry concealed weapons can become the crazed gunmen. From 1996 to 2001, 41 concealed-handgun license holders in Texas were arrested for murder and attempted murder. And permit holders were arrested for weapons offenses 81 percent more often than the state’s general 21-and-over population. Just a decade ago, after launching a year-long investigation into the Lone Star State’s licensing laws, the Los Angeles Times reported that 400 criminals with prior convictions had been issued concealed-carry permits despite background checks. And more than 3,000 licensees had since been arrested, including a computer analyst who shot a bus driver in the chest because he’d nearly missed the bus.

But there’s another group on Perry’s side: Students for Concealed Carry on Campus. At the annual Gun Rights Policy Conference last weekend in San Francisco, SCCC president David Burnett cited the 2007 Virginia Tech shooting—in which “a young and mentally deranged individual took a firearm,” killed 32 people, wounded 17 others, then killed himself—as an example of why licensed gun holders should be allowed to carry them on campus.  “The only alternative that we have is to duck and cover,” Burnett said. “A lot of these college campuses like to pretend that they are exempt from the freedoms that we have to carry a concealed weapon.” In protest, 130 campuses have participated in “Empty Holster Contests,” according to Burnett, where they wear their holsters to school sans guns as a symbol that they are disarmed and vulnerable.

Currently, Colorado and Utah allow concealed weapons on campuses. But gun advocates have vowed to press the state on the side of public armament. A Texas state representative, Republican Joe Driver, plans to file legislation (again) that would invite gun-toters back to school, cocked and locked. Criminals “would not go to a place where they don’t know who has a gun,” Driver says. “I think it’s an absolute deterrent.”