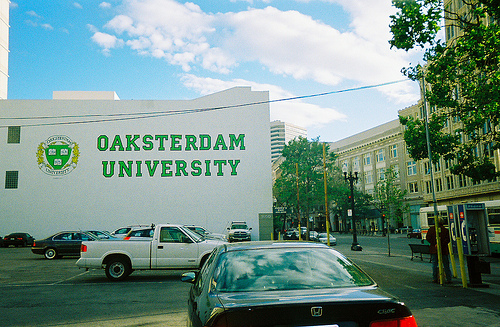 Earlier this year, the City Council of Oakland, California, voted to issue permits for industrial-scale medical marijuana farms. Four hydroponic warehouses, each holding some 30,000 cannabis plants, are expected to yield the city between $4.8 and $7.7 million per year in tax revenues. City boosters hope the farms will help re-brand this rusting port city as a capital of all things cannabis, an “Oaksterdam” with its own brands of pot-related products and tourist destinations. But there’s a hitch, California Watch reports, and it involves the federal government:

Officials from the Justice Department’s civil division and the U.S. attorney’s office in San Francisco delivered the blunt message to Oakland City Attorney John Russo, according to two officials who asked not to be identified because they were not authorized to talk about the meetings.

“The warning is clear: These are illegal, large-scale pot growing operations, with Oakland planning to get a cut of the illicit profits,” said one official.

Apparently, Russo saw all of this coming. Yesterday the Bay Citizen reported that he’d declined to sign off of the city’s pot farm plan and issued a memo in August raising legal concerns about it.

But none of that seems to have mattered to Oakland’s politicians. Medical marijuana businesses are major political donors here and enjoy widespread public support. In a telling moment this fall, Oakland’s two leading mayoral candidates both showed up to the grand re-opening of weGrow, a chain based in East Oakland that aims to become the nation’s first “marijuana superstore.”

Years ago, when Oakland first began permitting medical marijuana dispensaries—now established businesses in town—it was also a legal gray area, City Council president Jane Brunner told the Bay Citizen. Yet Brunner left the door open to the possibility that the city could still back down on the farms. “We should know what we’re getting into,” she said. “We shouldn’t go into this blindly.”