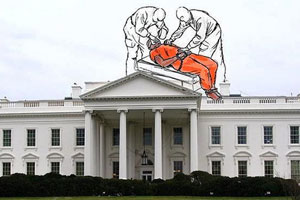 Taxpayers are currently paying the legal bills for Jim Mitchell and Bruce Jessen, two CIA contractors who reportedly helped plan and execute the Bush administration’s “enhanced interrogation” program, the Associated Press’ Adam Goldman and Matt Apuzzo reported Thursday night. The CIA agreed to pay up to $5 million to cover legal fees for the two men—far more than the standard amount that would be covered for employees of the agency (during the Bush administration, it was standard practice for CIA officers to pay half of the cost of insuring themselves against possible legal action).

Later, Mitchell and Jessen reportedly performed some interrogations—including waterboarding—themselves. The waterboarding technique Mitchell and Jessen reportedly used on suspected Al Qaeda members Abu Zubaydah and Abd al-Nashiri was different from the simulation used in SERE because it was “‘for real'” and “more poignant and convincing,” a CIA inspector general’s report later concluded.

It has long been the talk of the town in Washington that Mitchell and Jessen are targets—and perhaps the top or even only targets—of federal prosecutor John Durham’s probe into what human rights groups call “torture-plus.” Durham’s investigation is looking at whether any interrogations of terrorist suspects went beyond the already brutal techniques authorized by John Yoo’s so-called “torture memos.”

Human rights and civil liberties advocates won’t be satisfied with a prosecution of Mitchell and Jessen—even a successful one. Many activists would prefer a full, 9/11 Commission-style investigation and report to a prosecutorial campaign that focuses on just a few of the many figures involved in Bush-era interrogation, detention, and rendition practices.

The relevant comparison is the Abu Ghraib detainee abuse investigation, which resulted in jail terms for low-level troops but no higher-level accountability, even though many of the techniques applied to prisoners at Abu Ghraib had been authorized for use by the military and/or the intelligence community. Human rights activists hated the outcome of that investigation. Errol Morris even made a movie about it. And as Adam Serwer points out, the troops at Abu Ghraib didn’t get close to the deal Mitchell and Jessen did.

Anyway, if the rumors are true and Durham really is zeroing in on Mitchell and Jessen, America could soon see a scenario in which taxpayers are paying not only for a torture prosecution that won’t satisfy the demands of the human rights community but also for the massive, top-notch defense team that will be trying to derail that same prosecution.

Here’s a video from ABC News, which tried to get Mitchell and Jessen to speak on the record in April of 2009. Both refused:

In other news, taxpayers are also apparently going to have to foot the bill for Rep. Pete King’s (R-N.Y.) McCarthy-esque hearings investigating the American Muslim commmunity.