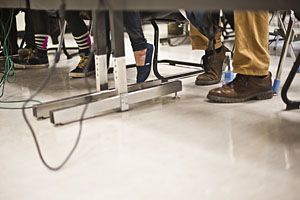 The legal complaint against Compton Unified (Murphy et al v. Compton Unified) details not only violations of the Parent Trigger law itself, but violations of the constitutional rights of parents and children by the Compton Unified School District. Having already denied the children of McKinley their constitutional right under the California Constitution to an “equitable public education,” the school district has subsequently infringed on the federal and state’s constitutional First Amendment rights of parents to petition their government to remedy this violation of their children’s rights “by crafting an onerous and burdensome process” intended not to verify their signatures, but to simply throw them out.”

“[Compton Unified has] consistently exhibited bad faith in their dealings with the Plaintiffs. CUSD refused to respond to emails, letters, and phone calls by the parent and failed to provide basic information about the verification procedure to parents until less than a week before they implemented a verification procedure.”

Meanwhile, The Los Angeles Times editorial board came out against the current version of the “Parent-Trigger” law and some of the tactics used by Parent Revolution to organize this campaign. From their Jan. 29 editorial:

“The first parent trigger petition, at McKinley Elementary School in Compton, offered an example of how the process shouldn’t work. The signature drive was held in secret, to avoid a backlash from the school, but with the decision pre-made for parents that the school would be taken over by charter operator Celerity Educational Group. There was no public discussion of parents’ options or rights. McKinley is not a school that has resisted change; though low-performing, it has dramatically raised test scores in recent years. Some parents complained afterwards that they didn’t understand the petition they were signing; others accused school personnel of threatening and harassing them to get them to rescind their signatures. Meanwhile, the school district has set up a process for verifying the signatures that is harder on parents and more intrusive than is reasonably necessary.”