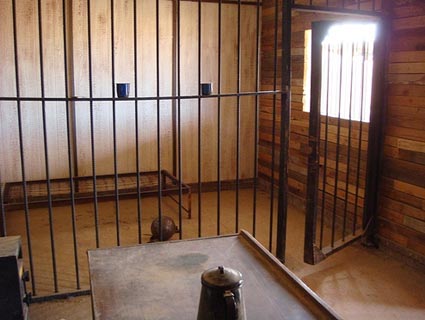 On July 19, 2007, a 33-year-old Chinese immigrant named Hiu Lui Ng arrived at his final green-card interview. Instead of a green card, he got arrested—on a faulty, six-year-old deportation order that he had no idea existed. A year later, Ng died in custody at the Wyatt Detention Facility in Central Falls, Rhode Island. He had a fractured spine, bruises, a blood clot, and cancer that had gone untreated for so long that it had “spread throughout his entire body,” according to court records. Ng received medical care only five days before his death on the order of a judge, after begging—and ultimately, legally petitioning—to get it for seven months.

The grim details of Ng’s death would likely never have surfaced if his wife hadn’t teamed up with the ACLU to file suit against Wyatt. (The case, if you’re wondering, is still ongoing.) Why? Because currently, there isn’t a single federal law requiring state-run jails and prisons to report detainee deaths, or what caused them. Not one.

Last week, the House Judiciary Committee moved to change that, approving the Death in Custody Reporting Act of 2011. If passed, the law would mandate that each time someone dies in law enforcement custody, the incident’s details must be reported to the attorney general. The bill applies to people in the process of being arrested, inmates, and immigrants held in detention centers.

The Death in Custody Reporting Act is actually more than a decade old. It was first passed in 2000, sponsored by Rep. Robert Scott (D-Va.). The law expired in 2006, and Scott has tried several times since to revive it, to no avail. This means that any reporting that’s happened in the past five years is utterly voluntary. And if there’s anything you remember from your high-school stats class, it’s probably that volunteer survey responses are a primo recipe for not-so-fabulous data.

Even so, the Bureau of Justice Statistics—the Department of Justice arm that aggregates prison mortality numbers—has continued collecting information. “We haven’t had a huge drop [in reporting],” says Margaret Noonan, the BJS statistician heading the agency’s prison mortality reporting program.

More common than full-on dropouts, she explains, is a fuzzier category: conveniently incomplete reports. “They’re giving us some level of data, but they may not be giving us the level that we had seen in previous years,” Noonan says.

In this regard, last week’s push to revive the bill is progress. If enacted, it would prompt comprehensive adherence to BJS’s reporting system—and with that, better understanding of who’s dying where and of what, and maybe even suggestions on how to avoid preventable deaths.

The act fails, though, in that it makes virtually no space in the reporting process for flagging abuse or negligence as a factor in custody deaths. “It’s just data. I don’t know how we would know if it was negligent, or how the person was abused,” Noonan says. “The form itself is pretty brief. They just fill it out.”

The reporting form is pretty bare-bones, asking jails to explain cause of death and medical care by coloring in some standardized-test-style bubbles. Such sparseness keeps the stories behind in-custody deaths pretty opaque. So opaque, in fact, that in 2008, a human rights organization made a video game that simulates just how complicated investigating these deaths can get.

The approved draft states that the attorney general should use prison mortality data to “examine the relationship, if any, between the number of such deaths and the actions of management of such jails, prisons, and other specified facilities.” The chances of this happening, though, are slim, particularly when key information is gathered in a way that makes it easy to keep the stories of people like Hiu Lui Ng out of the official narrative.