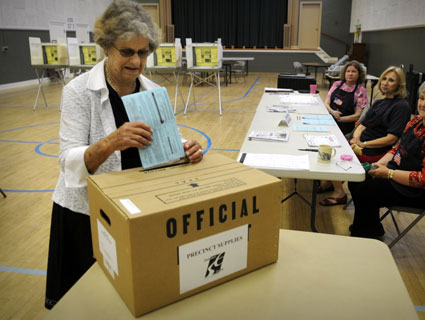 The US District Court for the District of Columbia has thrown out a challenge to the Voting Rights Act.

The plaintiffs in the case—a coalition of conservative legal groups from Shelby County, Alabama—argued that the VRA is unconstitutional because it has outlived its purpose of guaranteeing minorities the right to vote. According to Section Five of the law, which was extended by Congress in 2006, nine (mostly southern) states must pre-clear changes to their electoral procedures with the Department of Justice. Shelby County argued that the pre-clearance requirement exceeds Congress’ enforcement authority and violates the Tenth Amendment.

But Judge John Bates, the George W. Bush appointee who dismissed the case on Wednesday, says otherwise. “Bearing in mind both the historical context and the extensive evidence of recent voting discrimination reflected in that virtually unprecedented legislative record,” Bates’ opinion reads, “the Court concludes that ‘current needs’—the modern existence of intentional racial discrimination in voting—do, in fact, justify Congress’s 2006 reauthorization of the preclearance requirement imposed on covered jurisdictions by Section 5.”

[The opinion] also applies a tough standard of review (“congruence and proportionality” rather than “rationality”), an issue on which the…court [has previously] hedged, and still held the law met the tougher standard for demonstrating appropriate congressional power. . . .

Judge Bates seemed to do a very good job dealing with both the current evidence of discrimination in the record (from the 1980s, 1990s and 2000s, as he says) as well as the “Bull Connor is Dead” problem. Many readers will walk away from the opinion thinking that if section 5 disappeared, discrimination based upon race in voting would reappear and grow in covered jurisdictions. (He does a very good job as well connecting private acts of racially polarized voting to specific state action.)

But Hasen also suggests the opinion doesn’t adequately differentiate between the sort of voter discrimination you might see in a state that must pre-clear under Section 5 and another state that isn’t subject to the law. In other words, Hasen thinks Bates’ argument is a little weak when it comes to fully explaining how conditions in the two kinds of states differ. That could be a source of considerable contention if this case—one of several pending cases challenging Section 5—comes before the Supreme Court.