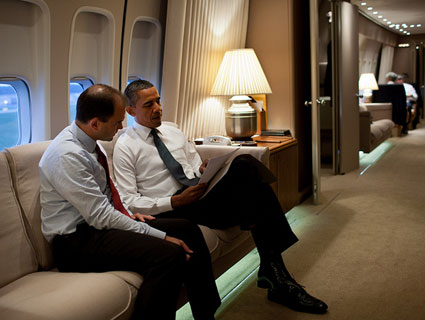 Obama failed to close Guantanamo Bay as promised. He continued warrantless surveillance and military tribunals that denied defendants basic rights. He asserted the right to kill U.S. citizens he views as terrorists. His administration has fought to block dozens of public-interest lawsuits challenging privacy violations and presidential abuses.

But perhaps the biggest blow to civil liberties is what he has done to the movement itself. It has quieted to a whisper, muted by the power of Obama’s personality and his symbolic importance as the first black president as well as the liberal who replaced Bush. Indeed, only a few days after he took office, the Nobel committee awarded him the Nobel Peace Prize without his having a single accomplishment to his credit beyond being elected. Many Democrats were, and remain, enraptured.

Turley’s political analysis is overstated, but his policy analysis is not. There’s nothing particularly unusual about Democrats’ silence on matters of civil liberties and national security, which is easily attributable to mere partisanship. Declaring it the function of a kind of mental affirmative action is silly. The same civil libertarian groups who were fighting Bush, like the American Civil Liberties Union and the Center for Constitutional Rights, are doing so now. What they lack is the support or amplification provided by prominent Democrats in Congress when the president was a Republican. Turley also lets the GOP entirely off the hook, as though there’s nothing unusual about a party whose mantra is “small government” offering no opposition whatsoever to the expansion of the national security state. Perhaps it’s just that Turley’s expectations for Republicans are so low that he doesn’t even see the contradiction as worth noting.

In as much as the president has cemented a bipartisan consensus over the expanding powers of government post-9/11, it’s true that his election was “one of the single most devastating events in our history for civil liberties.” Still, there’s an important distinction between Bush and Obama that may seem academic now but matters greatly in terms of the permanance of the post-9/11 national security state. Charlie Savage’s recent essay “Power Wars” crystallizes this distinction:

If the key to understanding the Bush administration is that they were seeking ways to expand executive power as an end to itself, the key to understanding how the Obama team sees what it is doing is that they are trying to show that you can fight a war against terrorists while operating within a framework of law. What seems clearer now than it was during the Bush-Cheney years is that there were two very different strands of criticism about the government’s post-9/11 legal policies that were all tangled up and conflated at the time. One strand was the rule of law critique: it said presidents have to obey federal statutes and treaties. The other strand was the individual freedom critique: it said that government officials should not have unrestricted power to wiretap people or imprison them without judicial authorization, regardless of whether Congress purports to grant them such power. So once Congress adjusted statutes late in the Bush years to kind of retroactively approve what the government had been doing, the rule of law concerns sharply diminished. But the civil libertarian concerns remained. Now we know that Obama was not the civil libertarian many of his supporters hoped he would be; he was just a rule of law guy.

The fact that Congress went back and legalized the illegal things Bush was doing because his administration was staffed with lawyers who believed in an imperial executive branch helps explain why there’s been so much policy continuity even though the legal rationales are very different. Why does this matter? Well the fact that Obama sees his powers as coming from Congress rather than from inherent Article II powers means that Congress can take them away. Right now, obviously, Congress doesn’t want to do this, but things might not always be that way.

Now, if you’re a civil libertarian, this distinction is meaningless in the short term, because in part what you find objectionable is the moral basis of the laws in the first place. If you think it’s wrong for the government to be spying on you without any evidence you’ve done anything wrong, then it doesn’t matter that Congress passed a law that says it’s okay. It’s still fundamentally wrong and Congress “legalizing” it is meaningless—to give an easy example, it’s not like segregation being legal made it justifiable.

But crucial to the question of whether or not Obama’s election is “one of the single most devastating events in our history for civil liberties” is how Congress will act in the future. If all that happens is that uncritical support for the national security state becomes an issue of unassailable bipartisan consensus, than Turley’s right. But if the Obama administration’s legal rationales pave the way for Congress rolling back those powers someday, well, then that would be a much better outcome, wouldn’t it?