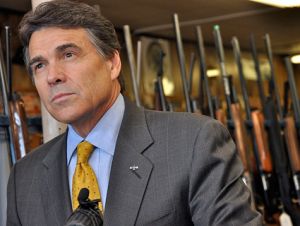 Texas, as Amanda Marcotte artfully put it, “is a really big state with a lot of different people in it”—something people often forget when they write about Texas politics. Along the same lines, Rick Perry is a long-serving governor who has done a lot of different things. Many of those things are questionable—his support for the repeal of the 16th and 17th Amendments, for instance, or his penchant for hooking up big-time donors with jobs and contracts.

But some of the stuff he’s done has been pretty good. Over at the excellent blog Grits for Breakfast, Scott Henson (who I spoke with for my story on Perry’s dubious prison health care privatization scheme) has a helpful roundup of some Perry-approved reforms, mostly on the criminal justice front, that progressives might actually like:

2001: Signed bill requiring local law enforcement to gather racial profiling data, including information on stops and searches. Authority was later given to a state agency to gather them all and publish them online.

2001: Became the first governor to sign the DREAM Act allowing children of illegal immigrants to attend college at in-state rates.

And so on. More recently, he’s signed some pretty progressive sentencing legislation designed to prevent overcrowding in state jails (by about 17,000 beds), and placing a greater emphasis on treatment versus incarceration for drug users. If this seems incongruous, there’s a method to it all.

“Perry will focus his energies on supporting policies if, number one, it’s not controversial, or number two, somebody who has been directly impacted manages to get his attention,” explains Ana Yanez-Correa, executive director of the Texas Criminal Justice Coalition. “So for example you have the Tim Cole family [Cole was posthumously pardoned by Perry after being executed for a crime he didn’t commit]. Well, his family had talked to the governor so it hit home for him… The same thing for the DREAM Act kids. In 2001, Texas was the first state to pass a DREAM Act version and Perry has defended his stance on the DREAM Act. But he’s actually seen these kids that are valedictorians. So if it hits home to him…he’ll be like, ‘okay, let’s do it.”

There might be something to that. As one longtime Perry-watcher explained to Jonathan Martin for his SEO-optimized “Is Rick Perry Dumb?” story, the GOP frontrunner has a pretty linear approach to knowledge: “If he should know about John Locke, he’ll know about John Locke… If it’s not on his schedule, it’s irrelevant to him.” The difficulty is in getting him to pay attention.

On the other hand, given Perry’s widely condemned record on the death penalty (presiding over the execution of Cameron Todd Willingham, who was likely innocent, and then squashing the ensuing investigation), and his cozy relationship with private prison lobbyists (see here and here), these bright spots on criminal justice do have a sort of “How was the play, Mrs. Lincoln?” quality to them.