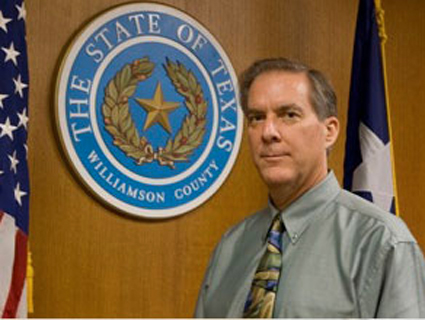 John Bradley was appointed by Rick Perry in 2009 to chair the Texas Forensic Science Commission.<a href="http://flickr.com/link-to-source-image">Courtesy of the Williamson County District Attorney's Office</a>

After 25 years behind bars for a crime he didn’t commit, Michael Morton will leave a Texas prison a free man on Tuesday afternoon. Morton was sentenced to life without parole in 1987 for the murder of his wife, Christine. But he maintained his innocence, and with the support of the New York-based Innocence Project, pushed for a court to consider DNA evidence found at the scene. For six years, Williamson County District Attorney John Bradley—a longtime Rick Perry ally who served as the governor’s chair of the Texas Forensic Science Commission (TFSC)—blocked efforts to perform new DNA tests, but last summer forensic experts were finally given access to a bandana that was found at the scene. The result? Tests linked the murder not to Morton, but to another unsolved crime involving a California man.

Coming just two weeks after Troy Davis was executed in Georgia, Morton’s release is both sobering and encouraging; the system corrected itself, but only after a quarter-century. As the Texas Tribune noted in August, it wasn’t just the DNA evidence that seemed to absolve Morton; there were plenty of unexplained loose ends that seemed to undermine the prosecution’s theory. The victim’s credit card turned up stolen in a different city when Morton was already in custody, for instance, and neighbors reported a suspicious van on the block at around the time of the murder. Bradley, who inherited the case when he became DA in 2001, also held back police records in which Morton’s three-year-old daughter suggested the killer was someone else.

(Bradley has stated that he had “good faith reasons” to oppose turning the evidence, but could not discuss them because the investigation of the murder of Christine Bradley was ongoing; the Innocence Project argued in court that Bradley held a grudge against the group, for reasons I’ll explain below.)

Bradley, who was first appointed to his post as district attorney by Gov. Perry, has drawn criticism for his opposition to the use of DNA evidence and, more generally, his support for destroying evidence after a plea agreement has been reached. (He’s previously argued that prosecutors should ensure the destruction of evidence is a prerequisite for such deals.) Part of Bradley’s justification for refusing to turn over evidence in the Morton case was that the inmate was untrustworthy because he had refused to “accept responsibility“—never mind that the whole point was that Morton might not actually be responsible.

Bradley is best known for his stint, at Perry’s invitation, as the chairman of the Texas Forensic Science Commission, the committee that was formed in 2005 to ferret out convictions that had been obtained through junk science. Bradley, whose appointment came just as the commission seemed on the verge of concluding that the conviction of Cameron Todd Willingham (who was executed in 2004) had been obtained through a flawed forensics process, immediately changed course and delayed any formal findings for 19 months.

As chair, Bradley (who continued on in his post as district attorney) also argued—successfully—that the commission did not have the authority to investigate cases that predated the existence of the TFSC, even as legislators who had written the group into law maintained that that was the whole point. As Steve Mims and Joe Bailey detailed in their new film on the Willingham case and its fallout, Bradley attempted to clamp down on dissent essentially by playing cultural politics—dismissing attorneys from the Innocence Project as “New York lawyers,” for instance. Ultimately, the Republican-dominated Texas Senate opted to effectively fire Bradley by declining to hold a vote on his reappointment to the commission.

Perry has signed some pretty progressive pieces of criminal-justice reform into law as governor, and, although it might pain his GOP primary audience to hear it, taken steps to reduce the frequency of capital punishment. But Bradley represents the more cynical side of Perry’s record, a purely political appointment with very real consequences for the justice system.

Here’s the full agreement between Bradley and Morton’s attorney, if you’re interested: