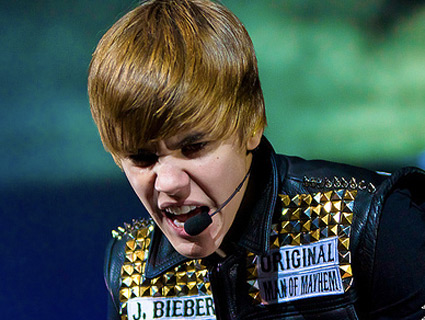 When he’s not allegedly coming on to women decades his senior or using Twitter as a weapon, tween-pop icon Justin Bieber rages against the machine of congressional Internet censorship. During a radio interview in late October, Bieber forcefully opposed the Commercial Felony Streaming Act, or S. 978, a bill that would make unauthorized online streaming of copyrighted material a felony punishable by up to five years in the slammer.

The legislation, which could theoretically apply to people who remix or cover pop songs on their YouTube channel, is currently backed by the Obama administration and co-sponsored by Sen. Amy Klobuchar (D-Minn.)—whom Bieber singled out as someone who “needs to be locked up—put away in cuffs” for supporting S. 978.

“People need to have the freedom,” Bieber said. “People need to be able to sing songs. I just think that’s ridiculous… I check YouTube all the time and watch people singing my songs. I think it’s awesome.” (Here’s an audio clip of the interview.)

Minus the call to have an extraordinarily popular lawmaker imprisoned for having an opinion, Bieber makes a decent point: The Commercial Felony Streaming Act is, at its core, terrible politics. Its vague phrasing—supposedly intended to target websites that rake in huge profits by illegally streaming copyrighted content—could potentially leave the door wide open for prosecuting this Korean kid for copyright infringement. Taken to its logical extreme, you’d have a new law that, in a digital era of viral videos and overnight crazes, is excessive (given laws already on the books) and completely unenforceable.

But opponents of S. 978 have chosen the wrong strategy by continuing to prop up Bieber as their mascot. This week, civil liberties group Demand Progress started drumming up support for a new ad campaign that “will air on cable news and Comedy Central throughout Minneapolis and Saint Paul at least through this week—the same week that HR. 3261, the House companion to Klobuchar’s S. 978, is heard before the House Judiciary Committee.”

We’re running this ad for one simple reason: We need to embarrass a key lawmaker to set an example for others, and make it clear that it’s not okay to shill for the entertainment industry at the expense of ordinary American’s [sic] civil liberties… Lawmakers love sponsoring Hollywood bills because it means untold thousands of new dollars for their campaign coffers… Let’s make sure everybody in Minnesota knows that their senator is wasting her time on punitive Internet censorship legislation—and losing her public spat with the Beebs.

Demand Progress maintains that passage of S. 978 would put Bieber in prosecutors’ crosshairs, since he himself rose to fame on the popularity of his own YouTube covers. No one really believes that, though; the use of Bieber as a poster boy for this campaign is due to his pop-culture name recognition. But if you’re looking for a good way to get people to take an issue seriously, is this really the guy you’d like to keep name-dropping?