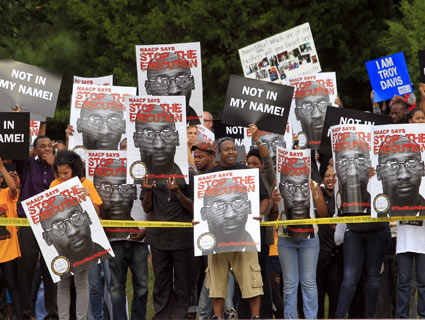 The North Carolina state senate voted to gut a law on Monday that allows death row inmates to argue that racial bias influenced their sentencing. Enacted in 2009, the Racial Justice Act requires judges in North Carolina to commute death row inmates’ sentences to life in prison if they find race played a “significant” role in the initial sentence.

State Republicans have long set their sights on undoing the law, the Wall Street Journal reports. The GOP-controlled North Carolina state house weakened the original law in June, changing its language to require that courts prove that prosecutors acted “with discriminatory purpose” when selecting juries and seeking the death penalty. But proving intent, as one attorney told the Raleigh News & Observer, is exceedingly difficult. And Colorlines‘ Jamillah King reports that the new language “represented a meaningful undermining of the point: The law had moved courts to a focus on racially disparate outcomes, rather than a racist intent.”

The law’s opponents say it is sloppily written, and could give inmates the ability to use statistics on racial bias from other jurisdictions in their appeals. Also at stake for Republicans: the future of capital punishment in North Carolina. They view the Racial Justice Act as a Trojan horse for ending the death penalty, pointing out that the state hasn’t ordered up an execution since 2006 (three years before the law was enacted). Just a few weeks ago, 43 of North Carolina’s 44 district attorneys wrote a letter to the state Senate asking legislators to repeal the Racial Justice Act for that very reason.

It’s a fair point—if you’re into executing people. Another fair point: according to a widely cited presentation at Michigan State University law school in 2010, defendants who killed a white person in North Carolina were more than twice as likely to receive the death penalty than when their victims were black. And the Raleigh News & Observer reports that African-American jury pool members who weren’t rejected for cause were rejected at about twice the rate as potential white jurors.

Since the death penalty was reinstated in 1977, 56 percent of inmates killed by the state [of Georgia] have been black. . . .

Nationally, 48 percent— that’s nearly 70,000 people—of those who’ve been sentenced to life in prison are black, despite the fact that the black inmates make up 38 percent of the total prison population.

North Carolina is one of 34 states in the U.S. that currently executes prisoners. The Death Penalty Information Center lists it as having the country’s sixth largest death row. The majority of people on it—86 out of a total of 157 inmates—are African American.

What’s at issue here isn’t the sanctity of capital punishment. It’s the fact that it has been wielded unjustly.