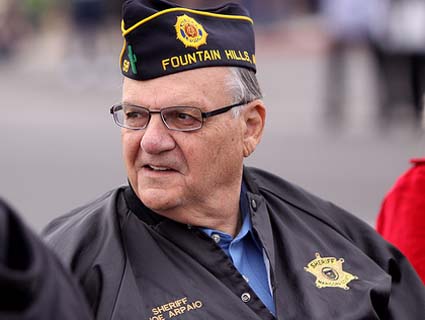 A Justice Department investigation into Sheriff Joe Arpaio, the self-described “toughest sheriff in America,” has found that Arpaio violated the civil rights of Latinos in Maricopa County, Arizona.

“We did not begin this investigation with any preconceived notions,” said Civil Rights Division Head Thomas E. Perez at a press conference in Arizona Thursday. “We peeled the onion to its core.” The conclusion? Arpaio’s office “engages in a a systemic disregard for basic constitutional protections.”

Although Perez stopped short of saying Arpaio needed to step down, he described the problems as being “deeply rooted in the culture” of the Maricopa County Sheriff’s Office. “We have to do culture change,” Perez said, adding “culture comes from the top.” The Department is seeking a legal agreement with the Maricopa County Sheriff’s Office that would force it to reform its practices, threatening to sue if it doesn’t cooperate.

That won’t come as a surprise to Arpaio’s fans or his critics.  In focusing his efforts on immigration enforcement rather than crime, Arpaio embraced a number of draconian methods—from anti-immigrant raids to pink underwear for jail inmates—that made him a hero to immigration restrictionists and, for immigrants rights advocates, a symbol of the nightmare scenario of what happens when local officials start enforcing immigration laws. (TPM’s Ryan J. Reilly reports that in response to the Justice Department’s findings, the Department of Homeland Security is cutting off the Maricopa County Sheriff’s Office’s access to the Secure Communities and the 287(g) programs, both tools DHS uses to turn local authorities into enforcers of federal immigration law.) Other than defeated Arizona State Senator Russell Pearce, the sponsor of Arizona’s strict SB 1070 immigration law, Arpaio is probably the figure most loathed by immigrants rights activists.

Arpaio has been under fire for a while, and not just because of his crusade against illegal immigration. His office is also the focus of a grand jury investigation, and a recent state probe concluded that Arpaio’s office failed to investigate sex crimes. Two federal courts—the latest in a ruling upheld last year—have found that conditions in Maricopa County’s jails were unconstitutional. Despite the presumption that unauthorized immigrants cause crime, rates in Maricopa County actually increased during Arpaio’s tenure, even when compared to similar jurisdictions, a fact noted in the Department of Justice’s report.

Nevertheless, Arpaio’s star was still shining bright enough that Republican presidential hopefuls actively sought his endorsement. That prize was eventually won by Texas Governor Rick Perry, who is desperately fighting off the impression that he doesn’t want to deport every single undocumented immigrant in the country.