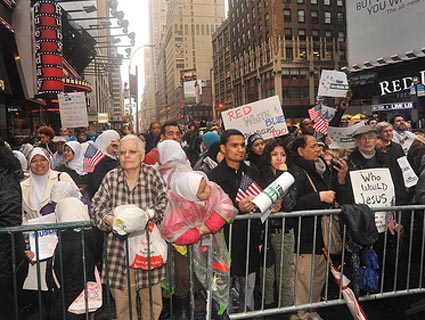 It’s no secret that New York City is a huge target for terrorism. In the last few months, however, the Associated Press has shown that the New York City police have responded to that threat by treating its entire Muslim community like possible suspects. That approach harms the NYPD’s ability to respond to threats in the future, since American Muslims are frequently the ones who alert law enforcement to poential threats.

Here’s what we now know about the NYPD’s counterterrorism operations:

Muslim advocacy and civil libertarian groups have protested the NYPD’s strategy, and on Friday they sent a letter to New York Attorney General Eric Schneiderman requesting a “prompt investigation into this matter.” Fatima Khan, the director of the Muslim civil rights group Muslim Advocates, released a statement saying that the NYPD policies “have completely shattered any confidence and trust with affected communities, and can only be repaired by rectifying these policies and holding those who engage in abusive and discriminatory practices accountable.”

The NYPD’s issues with racial profiling seem reflective of an obvious structural issue: it has responsibilities and powers approaching those of a federal agency without federal-type oversight.

Writing in the New York Times, the Brennan Center’s Faiza Patel and Elizabeth Goitein argue that what the city needs is an independent inspector general focused on the NYPD.

History shows that any attempt to oversee the police will be met with great resistance by the department and its political allies. But no agency is immune from mistakes. When the stakes are as high as they are in fighting terrorism, there must be a mechanism to identify excesses and wrongdoing. We need an independent inspector general for the Police Department. Such an official would have seen the film scandal for what it is: not the error of one sergeant, but an indication that procedures for authorizing training materials are lacking. Oversight makes government stronger, not weaker.

Patel and Goitein note that Bloomberg himself has bragged that the NYPD is “the seventh biggest army in the world.” A mechanism for accountability that reflects that power is probably in order.