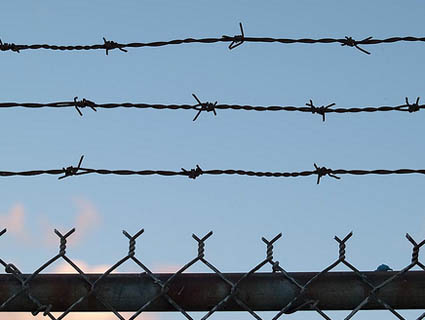 With Congress getting ready to assemble the next big defense authorization bill, two House members are coming together across party lines to ensure that everyone arrested in the United States—even suspected terrorists—gets a fair trial.

Last year, during the fight over the National Defense Authorization Act (NDAA), Congress debated legalizing indefinite detention for American citizens suspected of working with Al Qaeda, ultimately deciding to dodge the issue. Now Reps. Adam Smith (D-Wash.) and Justin Amash (R-Mich.) are planning to offer an amendment to this year’s defense authorization bill that would guarantee that no one—citizen or otherwise—could be denied a fair trial if captured in the United States. Smith, who is the ranking member of the House Armed Services Committee, will introduce the bill during a hearing Wednesday. Amash has agreed to support it once the defense bill comes to the floor next week, possibly bringing along enough Republican support to ensure its passage in the House.

“The amendment is drafted to prevent the president from indefinitely detaining persons captured on US soil without charge or trial,” said Will Adams, a spokesperson for Amash.

Some legislators have responded to the NDAA backlash with proposals that do not truly address the matter. Rep. Scott Rigell (R-Va.) offered legislation that would “guarantee” a judicial hearing for anyone captured on US soil. The proposal effectively does nothing because the Supreme Court has already ruled that terror detainees, citizens or otherwise, can use the right of habeas corpus to challenge their detention. But being able to challenge a detention is not equivalent to the right to a trial. Rigell’s proposal “doesn’t even come close to the rights that Americans are due under the Constitution,” says Adams, Amash’s spokesman.

Still, Rep. Buck McKeon (R-Calif.), the chairman of the armed services committee, has integrated the language of Rigell’s “habeas guarantee”—not the Smith-Amash proposal—into his version of the defense bill.

The Smith-Amash bill also faces serious opposition in the Senate, especially from a group of senators who tried to authorize indefinite detention for US citizens last year.

But Amash is hopeful. “There were many Republicans who voted against the NDAA on final passage [last year] in large part due to the detention provisions,” Adams says. “If you do the math, you realize we’re within striking distance of fixing [them].”