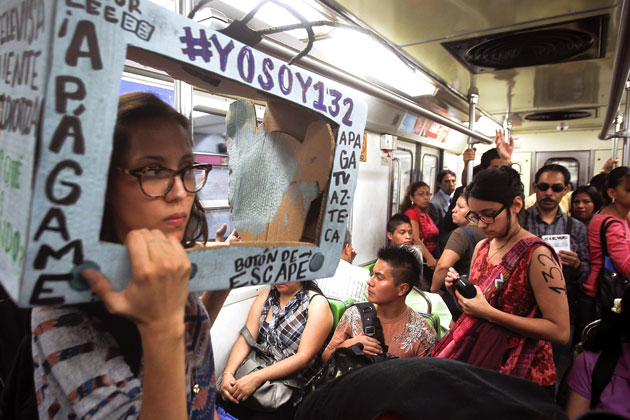 A student in the "Yo Soy 132" movement protests media manipulation on a Mexico City metro in mid-June. El Universal/ZUMA Press

“The fact that you can make jokes about extremely tragic subjects is something that people are experts at here in Mexico,” says Greg Berger, known as “gringoyo,” a contributor to the website Narco News. An expat who says he learned everything about satire from his Mexican friends, Berger spins out political parodies based on archetypes of figures spotted in the country, like “the revolutionary tourist,” “the greedy businessman,” and “the misinformed reporter.” By making fun of foreigners, those in power, and also of himself, Berger engages viewers in conversations about democracy and culture. Reporting in a country where drug cartels are thriving and where the media are in many ways crippled, he’s found an audience eager for his lampoons.

And the absurdity seems at an all-time high as Mexico nears its presidential election. Berger is just one of the figures encountered in On the Media‘s episode “Mexican Media: Es Muy Complicado,” in which reporters Brooke Gladstone and Marianne McCune take the temperature of our southern vecino, interviewing reporters, students, and activists from Juarez to Veracruz.

Berger’s political theater seems paralleled in the country’s actual electoral politics. Gladstone spoke to Benito Nacif, general counsel to Mexico’s Federal Electoral Institute (the Mexican version of the FEC), who referenced a recent law that bans candidates from directly buying ads, mandating that the FEI pay for the ads and regulate them instead. The lengthy vetting process the institute requires has in turn opened a space for TV commentators, often paid off by rival candidates in the editorial “black market,” to jump in and characterize politicians before they have the chance to respond. “You’re making these TV channels more powerful than they were in the past,” Nacif says. “It’s completely the opposite” of what the FEI intended.

“Mexican Media” also explores mural-painting as rebellion, traces the steps of las mujeres desaparecidas, and zooms in on the student political protests (including the “Yo Soy 132” movement, pictured above) now buzzing in Mexico City. You can listen to the full episode below.