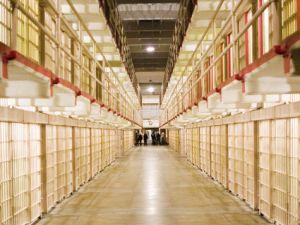 Federal Bureau of Prisons director Charles E. Samuels has been in the hot seat lately over the BOP’s treatment of some of the prisoners in its custody—most notably the mentally disabled prisoners housed in solitary confinement at ADX Florence, the federal supermax prison in Colorado. Samuel’s latest response was to write an uncharacteristically touchy feely letter to all federal prisoners, urging them not to commit suicide.

A federal class-action lawsuit filed in June alleges that many ADX prisoners suffer from severe mental illness that has been exacerbated or even caused by their years of extreme isolation and sensory deprivation in small concrete cells. It claims that the BOP fails to provide even a semblance of psychiatric care to these prisoners, with grisly results. According to a litigation fact sheet, “inmates often mutilate themselves with razors, shards of glass, sharpened chicken bones, writing utensils and other objects. Many engage in prolonged fits of screaming and ranting. Others converse aloud with the voices they hear in their heads. Still others spread feces and other waste throughout their cells. Suicide attempts are common. Many have been successful.”

Another lawsuit, filed earlier in the spring, accuses ADX officials of denying proper mental health care to inmate Jose Martin Vega, who subsequently hanged himself in his cell.

Days after the June lawsuit was filed, during the first Congressional hearing ever held on the use of solitary in America’s prisons, Samuels was grilled on the subject of mental health care by Senator Dick Durbin. A longtime corrections bureaucrat who worked his way up from prison guard, Samuels admitted under questioning that the BOP employs only two mental health care providers for the 490 inmates at ADX—which, according to federal prison policy, is not supposed to house mentally ill prisoners at all.

Now, the BOP apparently has come up with a new way of dealing with this volatile situation. Last week, the Atlantic‘s Andrew Cohen, who has been reporting extensively on the lawsuits, uncovered a “Suicide Prevention” memo that Samuels sent to “All Bureau Inmates” on July 20.

“At times you may feel hopeless about your future, and your thought may turn to suicide, the memo preaches. “If you are unable to think of solutions other than suicide, it is not because solutions do not exist; it is because you are currently unable to see them…Do not lose hope. Solutions can be found, feelings change, unanticipated positive events occur. Look for meaning and purpose in educational and treatment programs, faith, work, family and friends.”

While it was apparently sent to all of the more than 200,000 inmates in the BOP’s custody, the memo concludes with a special message to those condemned to solitary:

“You may be reading this message while in a Special Housing Unit or Special Management Unit cell, thinking your life is moving in the wrong direction. But wherever you are, whatever your circumstances, my commitment to you is the same. I want you to succeed. I want your life to go forward in a positive direction.”

The kicker is a quote from Albert Einstein: “Learn from yesterday, live for today, hope for tomorrow.” (You can view the entire memo here.)

Such homilies would seem a particularly cruel joke for the prisoners at ADX and other solitary confinement units, who are denied virtually all “educational and treatment programs” other than closed-circuit television, occasional work, and visits from loved ones. Some of them have been living alone in their gray boxes for years or decades, and many are effectively kept there for life.

One inmate in solitary received a “tele-psychiatry” session—allegedly while shackled and surrounded by guards, reports the Atlantic.

Consider Thomas Silverstein’s description of his 10,000-plus days in extreme solitary confinement—a condition Silverstein, who killed a prison guard, has little to no prospect of ever changing. Or the story of Jack Powers, who was sent to ADX after an escape attempt, and is profiled in one of Cohen’s articles: “As he sits today in Supermax, Powers had amputated his fingers, a testicle, his scrotum and his earlobes, has cut his Achilles tendon, and had tried several times to kill himself,” Cohen writes. “He did much of this—including biting off his pinkie and cutting skin off his face—in the Control Unit at ADX while prison officials consistently refused to treat his diagnosed mental illness. Rules are rules, prison officials told him, and no prisoners in that unit were to be given psychotropic medicine no matter how badly they needed it.”

The BOP memo assures prisoners that “every institution is staffed with psychologists who provide counseling and other supportive mental health services. Anytime you want to speak with a psychologist, let staff know and they will contact Psychology Services to make the necessary arrangements.”

Cohen explains what happened to prisoners who did ask for help: One, he writes, “was given a ‘tele-psychiatry’ session whereby he spoke via video conference with an off-site doctor. [He] alleges that, during the session, he was handcuffed from behind with shackles on his legs and surrounded by corrections officers.” Another inmate “tried to commit suicide in 2008, [and] was promptly returned to the cell in which he had made the attempt, a cell which was still covered in his own blood.”