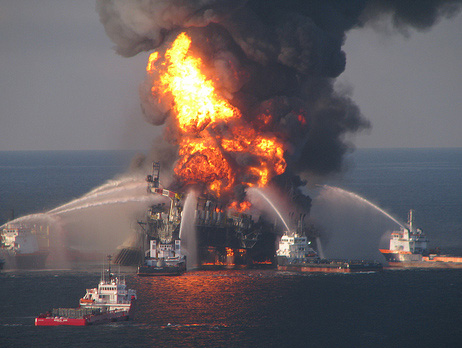 The Department of Justice, the Securities & Exchange Commission, and BP have reportedly reached a settlement agreement over the criminal charges related to the 2010 Deepwater Horizon spill, with the oil giant agreeing to pay $4.5 billion in fines.

The Washington Post reports that the BP will pay $4 billion over five years to settle with the DOJ, and another $525 million to settle SEC complaints:

“We believe this resolution is in the best interest of BP and its shareholders,” said Carl-Henric Svanberg, BP’s Chairman. “It removes two significant legal risks and allows us to vigorously defend the company against the remaining civil claims.”

To reach the settlement, the company pleaded guilty to a handful of criminal complaints:

BP could still face enormous civil penalties for Clean Water Act violations based on the number of gallons of oil released, and for damage to natural resources. The settlement with the DOJ and SEC does not include a deal with cleanup workers and local residents impacted by the spill and does nothing to end private lawsuits filed by investors.