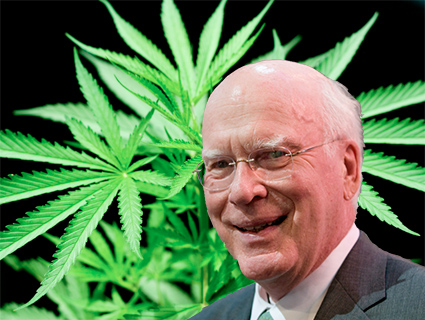 As the Obama administration mulls over how it will respond to the ballot measures that legalized marijuana in Colorado and Washington, Sen. Patrick Leahy (D-Vt.) is getting ready to turn up the heat on the issue on Capitol Hill. Leahy, who chairs the Senate Judiciary Committee, plans to hold a hearing when Congress convenes in January on how the Obama administration will respond to the new laws. Earlier this month, Leahy sent a letter to drug czar Gil Kerlikowske seeking assurance that the feds won’t go after officials for implementing the laws, and asking for his recommendations on the matter.

Attorney General Eric Holder has already heard from 17 House Democrats, who have urged him to leave Colorado and Washington alone. Ten House members also cosigned a bill introduced by Colorado Democrat Diana DeGette that would prevent the federal government from preempting state marijuana laws, including Colorado Republican Mike Coffman, a marijuana foe who, like Gov. Mitch Daniels (R-Ind.) and many libertarian-minded Republicans, sees marijuana as a states’ rights issue.

Leahy’s letter to Kerlikowske suggests a compromise similar to DeGette’s: “Legislative options exist to resolve the differences between Federal and state law in this area and end the uncertainty that residents of Colorado and Washington now face. One option would be to amend the Federal Controlled Substances Act to allow possession of up to one ounce of marijuana, at least in jurisdictions where it is legal under state law.” But Jessica Brady, Leahy’s judiciary committee press secretary, was quick to say that Leahy is “not endorsing” that option, “nor saying others should.” For now, the senator is simply “looking forward to hearing from [Kerlikowske] and learning more about the issue,” she said.

Whatever Kerlikowske’s response, Judiciary Committee Republicans may not be as eager as Coffman and Daniels to keep the feds away from legal pot. Iowa Sen. Chuck Grassley, the committee’s ranking Republican, has compared the drug to rape and genocide. Another GOP member, Jeff Sessions of Alabama, asked Drug Enforcement Agency head Michele Leonhart during her 2010 confirmation hearing if she was willing to say that medical marijuana had “failed” in states that had legalized it. Leonhart, who promised to continue enforcing federal pot laws over states’ objections, replied, “You’re absolutely correct.”