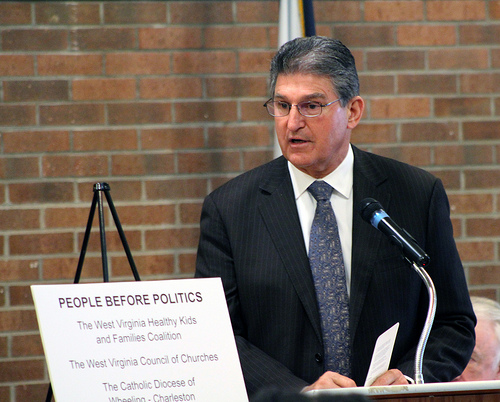 Sen. Joe Manchin (D-W.Va.), a gun rights stalwart with an “A” rating from the National Rifle Association, joined the growing chorus of lawmakers and advocates in calling for new gun regulations. On MSNBC’s “Morning Joe” Monday, Manchin said “it’s time to move beyond rhetoric. We need to sit down and have a common-sense discussion and move in a reasonable way.”

He went on to say, “Everything has to be on the table.”

Manchin’s unexpected statements came a day after President Obama addressed the nation from Newtown, Conn., the site of a gruesome mass killing at an elementary school. The shooter, 20-year-old Adam Lanza, killed 27 people, including 20 children who went to Sandy Hook Elementary. Lanza also killed himself. Obama said during a nationally televised address that “in the coming weeks I’ll use whatever power this office holds” in a move “aimed at preventing more tragedies like this.”

The list of elected officials calling for a renewed gun control debate, if not new regulations, grows longer by the day in the wake of the Newtown killings. On Friday, New York Michael Bloomberg, the co-chair of Mayor’s Against Illegal Guns, said that new legislation is needed to prevent more mass killings like those in Newtown, and Aurora, Colo., and on the campus of Virginia Tech. “Calling for ‘meaningful action’ is not enough,” Bloomberg said in a statement. “We need immediate action.” Joining Bloomberg is calling for new gun laws is Boston Mayor Thomas Menino and a slew of Democratic lawmakers in Congress. “If now is not the time to have a serious discussion about gun control and the epidemic of gun violence plaguing our society, I don’t know when is,” Rep. Jerrold Nadler (D-N.Y.) said in a statement.

The NRA has yet to comment on the Newtown killings.