By now, most Americans know that Congress reauthorized the Violence Against Women Act (VAWA) on February 28, giving the government the resources to better investigate, prosecute, and stop violent crimes against women. Lawmakers have proudly announced that they helped pass the law—in some cases even when they voted against it.

Representative Jeff Fortenberry (R-NE) was one of the 160 Republicans who voted against the reauthorization of VAWA. Prior to that, he had voted for a GOP version of the bill put forth in the House, which gutted key protections for Native Americans, members of the LGBT community, and undocumented immigrants. The bill was rejected by the House. Nevertheless, Fortenberry issued a statement on February 28 suggesting that he supported both versions of the bill, according to screenshots from his official website obtained by Mother Jones. Later that day, after his office started receiving criticism of his statement, Fortenberry changed the statement to more accurately reflect his actual vote. Here is what was changed and added, marked up in red: 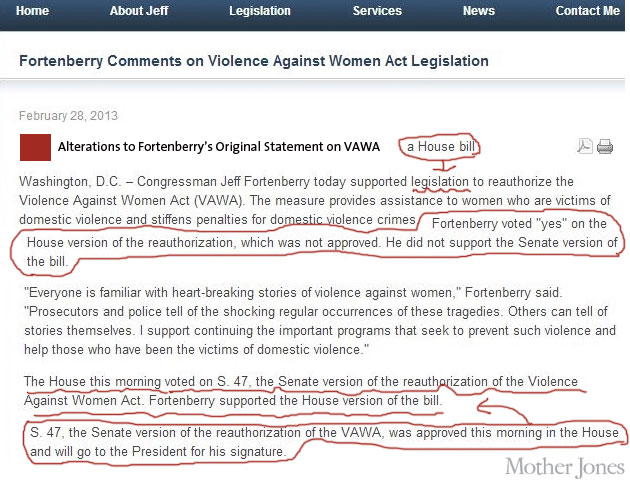 And here’s what commenters had to say on Fortenberry’s Facebook page about the changes: 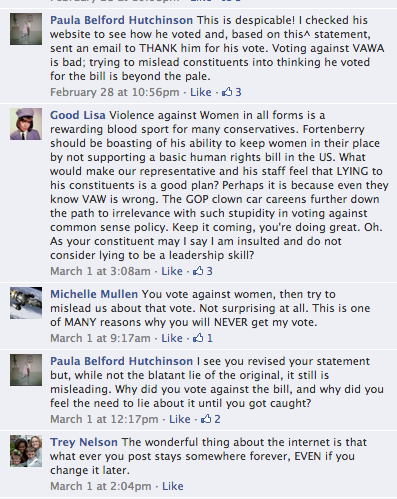 Fortenberry, who has not responded to a request for comment, isn’t the only lawmaker to issue a misleading statement about the vote. According to The Huffington Post, Rep. Steve King (R-Iowa), Rep. Bill Johnson (R-Ohio), Rep. Tim Griffin (R-Ark.), and several other Republicans also played up that they supported the version of the bill that failed. The House version may have been designed in part to give them cover on the issue, but the question is: Do these lawmakers really care more about their voting records than stopping violence against women?