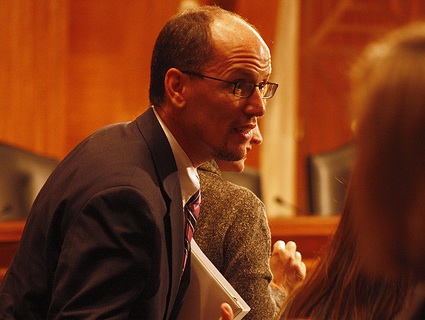 Earlier this month, President Barack Obama nominated Thomas Perez, the head of the Justice Department’s civil rights division, to run the Department of Labor. Now, with Republicans scrambling to find any excuse block Perez’ appointment, the civil rights division has issued a report detailing its accomplishments over the past four years.

“For more than 50 years, the Division has enforced federal laws that prohibit discrimination and uphold the civil and constitutional rights of all who live in America,” the report reads. “Over the past four years, the Division has worked to restore and expand this critical mission.” The report has been in the works since prior to Perez’ nomination as labor secretary.

The word “restore” is a backhanded critique of the Bush administration, during which enforcement of civil rights laws dropped and the leadership of the civil rights division was found to be deeply politicized. Under Perez, the division claims to have worked on more voting rights cases, agreements with local police addressing misconduct, and hate crimes convictions than ever before, while acquiring the highest fair housing discrimination settlements in history. Civil rights advocacy groups tend to share the leadership of the division’s view that things have improved tremendously since the Bush years.

Perez himself has been under fire from Republicans because of a recent Department of Justice Inspector General report that found lingering partisan divides in the voting section while knocking down almost all of the criticisms the GOP has leveled in the division’s direction. Republicans are also angry that Perez helped cut a deal that prevented the Fair Housing Act being gutted by the Supreme Court. But given the modern GOP’s hostility to many civil rights laws as unjust federal infringement on state’s rights, a strong record of enforcement in the civil rights division may just be another reason for Republicans to oppose his nomination.