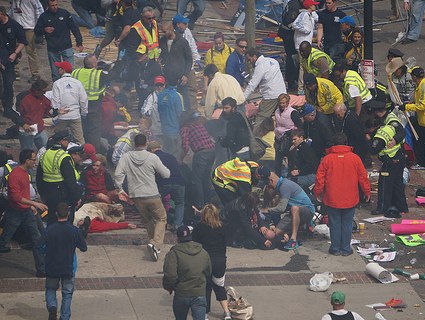 The bloody attack on the Boston Marathon that caused over a hundred casualties Monday seemed designed to maximize media coverage and cause as much harm as possible. But despite the potential for media attention and mass casualties, attacks on sporting events are relatively rare compared to attacks on other sorts of targets, says Bill Braniff, who runs the National Consortium for the Study of Terrorism and Responses to Terrorism (START) at the University of Maryland.

The Olympics and the World Cup have occasionally been targets for terrorists because of their prominence on the international stage. But attacks on marathons are even less common than attacks on sporting events in general. According to START, counting Monday’s attack in Boston there have been seven terrorist attacks on marathons. Only one was more lethal than the Boston bombing. Here’s a summary:

Sri Lanka, 2008: The separatist Tamil Tigers detonated a bomb at a marathon outside the capital city of Colombo, killing 14 people and injuring 83. The attack was a successful assassination attempt on the Sri Lankan minister of highway and road development, Jeyaraj Fernandopulle.

Ireland, 1998, 2003, and 2005: There were three attacks associated with the Belfast Marathon between 1998 and 2005, in which local authorities suspected the Irish Republican Army or its radical offshoot, the Real IRA, were responsible. In 1998 the IRA was suspected of firing mortars at a local police station, prior to the marathon, which was “disrupted” as a result, but the mortars did not explode. In 2003, there was a bomb placed in a van prior to the marathon, but the van owner called the police who defused it. In 2005, a pipe bomb was placed along the marathon route that was again disabled by police.

Pakistan, 2006: START counts as two incidents violent protests in response to a marathon in Lahore, by groups opposed to the fact that men and women were both allowed to participate. There were arson attacks and two police officers and two civilians were injured.

Bahrain, 1994: START lists as one of the incidents an attack on marathon runners along the al-Budayyi’ Highway. START lists the motive as “unknown,” but speculates that the attackers may have been motivated by the dress of the runners, some of whom were women, or the route’s proximity to the “remains” of a former mosque.

Terrorists might be reluctant to strike at sporting events because “there is so little perception that the people watching a sporting event are responsible for any grievance,” Braniff says. “A backlash is very likely because people will see this for what it is, which is an indiscriminate attack on innocent civilians,” he adds. “It’s very hard to come up with an argument that the people running this marathon are legitimate targets, even for an international terrorist organization.” That’s not always the case—extremist Islamist groups in Somalia have targeted sports fans and events in part because they see identifying with sports teams as a threat to the strict religious identities they are trying to force on others.

The final number of deaths and injuries from the attack in Boston is not yet known, but if the early number of casualties holds it will be the highest-casaulty attack on a marathon in history. According to the START database, there have been over 2000 terrorist attacks in the US between 1970 and 2011, less than two percent of which have caused more than ten casualties.