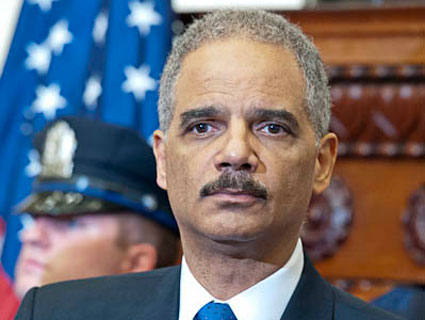 At a Tuesday press conference, Attorney General Eric Holder announced that he had ordered the Justice Department and FBI to investigate whether the Internal Revenue Service violated the law by subjecting tea party groups applying for tax-exempt nonprofit status to special scrutiny. Other dark money organizations that have drawn criticism from advocates of campaign finance reform, including the pro-Obama Priorities USA and Karl Rove’s Crossroads GPS, have received little attention from the IRS.

The controversy, which was first reported on Friday, is the latest in a long line of alleged IRS witch hunts against specific political and religious organizations.

The activities of I.R.S. officials are already the subject of an investigation by the agency’s inspector general. The results of that inquiry, which are expected in the next several days, are likely to detail how officials at the agency selected political groups for extra scrutiny about their tax status.

The attorney general said there were “a variety of statutes within the I.R.S. code” that could be the basis of a criminal violation. He said officials conducting the investigation would also look at “other things in Title 18” of the United States Code. Title 18 is the overall criminal code for the federal government.

During a concurrent press conference, White House press secretary Jay Carney said that “if the reports about the activity of IRS personnel prove to be true,” President Barack Obama “would find them outrageous, and he would expect that appropriate action be taken, and that people be held responsible. He has no tolerance for targeting of specific groups.”