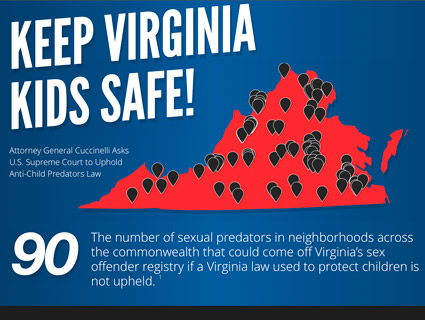 Last month, Cuccinelli appealed to the Supreme Court, after an appeals court ruled that the anti-sodomy law is unconstitutional. The Supreme Court already declared laws banning sodomy unconstitutional in Lawrence v. Texas back in 2003, but Virginia kept its “Crimes Against Nature” law on the books. Cuccinelli has been trying to use that statute to prosecute a man for having oral sex with two teenagers. The AG insists that the law is “an important tool that prosecutors use to put child molesters in jail.”

With the new website, Cuccinelli is trying to put Democratic gubernatorial candidate Terry McAuliffe on the defensive, arguing that he’s “playing politics instead of protecting our children.”

But as I’ve written before, Cuccinelli’s argument will be a tough one to make before the Supreme Court, because it’s basically asking the justices to rule again on an issue they’ve already decided on so that Virginia can keep a legal loophole open:

This specific case deals with a man who was prosecuted under the “Crimes Against Nature” statute for having had oral sex with women, a felony offense under that law. The man in the case, William MacDonald, was in his late 40s when he was charged with having consensual oral sex with two young women who were, at the time, ages 16 and 17. While that might be seen as creepy, in Virginia, the age of consent is 15 years old. It is considered statutory rape—a felony offense—to have sex with anyone under that age. Under state law, an adult can be prosecuted for “causing” delinquency by having sex with someone between the ages of 15 and 18, but that is only a misdemeanor. MacDonald was convicted of such a misdemeanor, and his lawyers aren’t challenging that conviction. But they have challenged—so far, successfully—the state’s attempt to prosecute him for violating the “Crimes Against Nature” law.

Because Virginia still has this anti-sodomy law on the books, the state wants to use it against MacDonald and win a felony conviction. The state, however, couldn’t prosecute him under this statute if he had engaged in vaginal sex. That is, the state is trying to use a loophole in the law that makes oral, but not vaginal, sex a felony in order to go after this guy. The court of appeals determined that MacDonald could not be prosecuted under this law because the US Supreme Court ruled in 2003 that such laws are an unconstitutional “intrusion into the personal and private life of the individual.”

Virginia’s anti-sodomy law may not be a winner with the courts, but Cuccinelli’s new campaign site makes it clear that he thinks it’s a winning issue with voters.