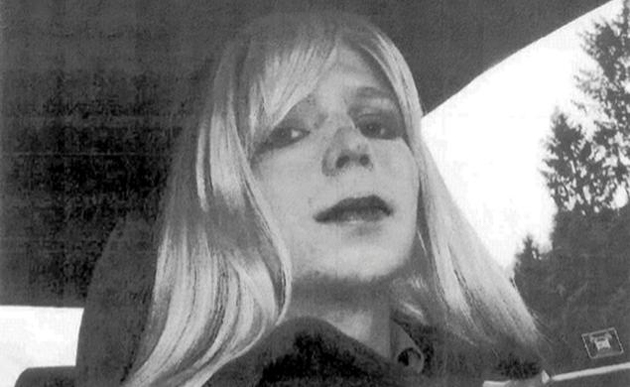 A photo of then "Bradley" Manning dressed as a woman. Date unknown.US Army

Shortly after being sentenced to 35 years in a military prison for leaking classified information to WikiLeaks, Bradley Manning announced a decision to live as a woman and switch to the name Chelsea. Manning released a letter to the Today show Thursday morning that said, “As I transition into this next phase of my life, I want everyone to know the real me. I am Chelsea Manning. I am a female.” Manning requested being referred to with the feminine pronoun, except with official mail sent to her at Fort Leavenworth, the Kansas prison where she will serve her sentence.

Manning now faces some unknowns with gender transition, including what will likely be a difficult battle to receive hormone therapy, which she indicated in her statement she wants to begin as soon as possible. Officials from Fort Leavenworth confirmed they do not provide transgender inmates with treatment beyond psychiatric care.

Manning’s attorney, David Coombs, told Today he hopes Forth Leavenworth will decide to provide Manning with the hormone treatment; if not, Coombs said he will “do everything in [his] power to force them to do so.” Coombs did not provide details to Today about his plans for legal action, but during a press conference yesterday following Manning’s sentencing, he said he is “going to become the smartest person on ensuring that a soldier who is in confinement, who has gender dysphoria, gets appropriate medical treatment.”

There is some legal precedent for transgender inmates in civilian prisons who wish to access hormone replacement therapy and sex reassignment surgery. Courthouse News reported a 4th Circuit court decision earlier this year which gave transgender inmates in five states the right to hormone replacement and sex reassignment, though the court did not order the prison to provide it. And in September 2012 a US district judge in Boston granted surgery to an inmate following attempts at suicide and self-castration. (The 1st US Circuit Court will preside over an appeal.)

As Mother Jones reported recently, transgender civilians were found to be twice as likely to enlist in the military, and the number of veterans accepting treatment for transgender health issues has doubled in the past decade. But military policy still forbids transgender people from serving openly.

In his Today show interview, Mr. Coombs also noted that his client has “no regrets” for providing the leaked documents. Watch: