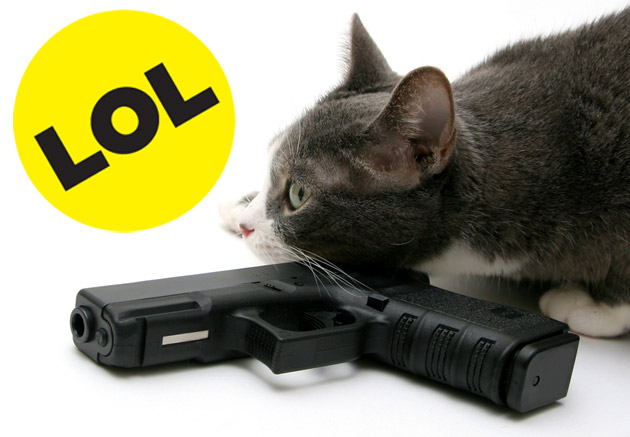 Oh, BuzzFeed, we love your serious reporting and we also love when you try to make ridiculous memes win the internets. But when you inadvertently help tenuous gun-lobby talking points go viral? Not so much.

Yesterday BuzzFeed staff writer Ryan Broderick posted a listicle titled “9 Potential Mass Shootings That Were Stopped By Someone With A Personally Owned Firearm.” That’s a pretty definitive headline for a post that can’t back up its claims.

“Can law-abiding citizens with guns combat mass shootings?” Broderick asks by way of introduction. That’s it—there’s no attempt to define his terms or explain the scope of his reporting. What exactly constitutes a “law-abiding citizen” or a “personally owned firearm”? And how do you define a mass shooting? Broderick doesn’t answer these potentially inconvenient questions, letting his post suggest that armed civilians are responsible for stopping nine mass shootings that were either in progress or about to start.

Contrast that with what my colleague Mark Follman has found in his extensive reporting on mass shootings (which is based on a clear explanation of the terms and criteria being used.) While pro-gun advocates claim that courageous gun owners have routinely stopped mass shootings, the reality is that armed civilians rarely respond to shooting rampages—and those who have are rarely, if ever, successful. Most of the examples they cite are either ambiguous or involve trained law enforcement or military personnel—not the ordinary citizens with personal firearms that Broderick alludes to in his clicktastic headline and just-asking-a-question subhead.

Here are the nine incidents listed in Broderick’s post and why they deserve a click on BuzzFeed‘s trademark “FAIL” button:

1. The Pearl High School shooting: In this case, a 16-year-old who’d killed two people and wounded seven was subdued by an assistant principal who retrieved a handgun from his truck. However, the shooting may have already been over when the assistant principal arrived. And he wasn’t an ordinary civilian: He was an Army reservist. All this is explained in issue of People whose image is in Broderick’s post. However, his sole link goes to David Horowitz’s Frontpage Mag (motto: “Inside Every Liberal is a Totalitarian Screaming to Get Out”).

2. The Parker Middle School dance shooting: Another case where a teenaged shooter may have already finished his rampage, which killed one person and wounded three, when an armed adult showed up. Yet Broderick says definitively that the shooting “was ended” when a man with a shotgun intervened.

3. The Appalachian School of Law shooting: Another deadly incident in which trained law-enforcement personnel stepped in. From a New York Times article Broderick links to:

Mr. Odighizuwa was subdued by three law students who were experienced police officers, the authorities said.

”We’re trained to run into the situation instead away from it,” said one of the three, Mikael Gross, 34, of Charlotte, N.C., who ran to his car for his bulletproof vest and service pistol before tackling the suspect.

Though the article notes that Gross grabbed his service pistol, Broderick vaguely describes it as a “personally owned firearm,” suggesting that he carried it for personal use.

4. The New Life Church shooting: Broderick makes it sound like this shooting, which killed two people and wounded three, was stopped by “a former police officer” who just happened to be at church that day. In fact, she was a church security officer.

5. The Trolley Square shooting: Yet another incident where a off-duty cop got involved. The officer who confronted the shooter during this Salt Lake City shooting was “well-trained for such an event,” according to the local news article Broderick cites.

6. The Golden Market shooting: “The details are murky,” writes Broderick, “but according to reports, a man entered a Golden Market in Virginia in 2009 and began firing a gun.” The  “reports” he links to are a breathless post on AmmoLand and a pro-gun op-ed in the Collegiate Times. The Richmond Times-Dispatch‘s account of the incident makes it sound like a botched robbery, not a thwarted mass shooting.

7. The New York Mills AT&T store shooting: A good example of a planned mass shooting being averted—by a cop. In this 2010 incident, a 79-year-old man with a handgun walked into an AT&T store, wounded one employee and apparently planned to kill several others whose names were on a list in his pocket. An off-duty police officer who was in the store shot and killed the shooter.

8. The Clackamas Town Center shooting: Nick Meli, an off-duty security guard, drew his concealed handgun on the shooter during this 2012 rampage that left three dead at an Oregon mall. Broderick doesn’t mention that Meli was a guard, but asserts that shooter Jacob Roberts “retreated” after seeing Meli produce his weapon, which he did not fire for fear of hitting a bystander. It’s not clear if Meli affected the outcome of the incident, which ended with Roberts killing himself. After a 926-page investigative report on the shooting was released, a sheriff’s spokesman told The Oregonian, “We have no information that the suspect’s—Roberts’—actions were ever influenced by anything Mr. Meli did. But I also can’t deny it.”

9. The San Antonio Theater shooting: In December 2012, a 19-year old opened fire at a San Antonio restaurant where he and his ex-girlfriend worked. He then shot at a police car and headed into an adjacent cinema, where he wounded one person. He was pursued and wounded by a security guard who was an off-duty sheriff. Breitbart described it as a would-be “mass shooting,” and Glenn Beck’s The Blaze suggested that the suspect had intended to shoot up a crowded theater. Yet the shooting appears to have been sparked by the breakup and it’s unclear how many people the suspect intended to kill. Broderick doesn’t acknowledge this uncertainty, adding more fodder to the questionable premise that more “good guys with guns” can stop the next mass shooting before it happens.