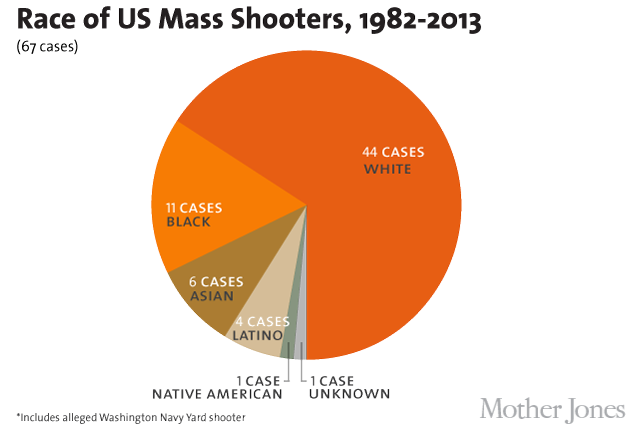 The details emerging about Aaron Alexis, the now-dead 34-year-old suspected of killing 12 people and injuring more at the Washington Navy Yard Monday morning, paint the picture of a complicated and troubled man. He loved Thai culture and went to a Buddhist temple. He served in the Navy from February 2008 to January 2011, most recently as an Aviation Electrician’s Mate, 3rd Class. In 2010, prior to leaving the Navy, he was arrested by Fort Worth police after being accused of recklessly discharging a gun; no charges were brought. Prior to enlisting, he shot the tires out of someone’s car in an “anger-fueled ‘blackout'”; Seattle detectives referred the case the DA’s office, which never filed charges.

But one detail, like a shiny object to a magpie, has captivated a certain segment of the population: Alexis’ race. A few enterprising Twitter users have even found a way to loop both Barack Obama and Trayvon Martin into their commentary on the shooter’s skin color, using a tragedy to further a political viewpoint or validate a convenient narrative about race and violence. But the facts on mass shootings in the US tell a much different tale than the one some are spinning.

A look at the data compiled by Mother Jones on mass shootings shows that 16 percent of the 67 mass shootings that have occurred since 1982 were committed by black shooters, including the alleged Navy Yard shooter, while 66 percent were committed by whites. Monday’s shooting, and all the others that have occurred in the last 30 years, does tell a story—about guns and safety and violence in the US. But if you’re looking at Aaron Alexis’ skin color, you’re missing the point.