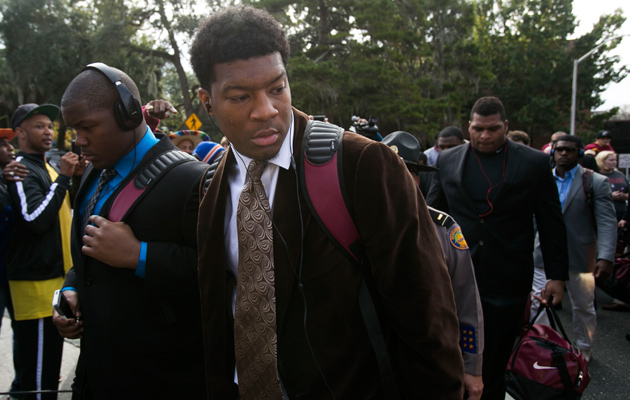 Last week, prosecutors in Tallahassee announced they would not press charges against Florida State quarterback Jameis Winston, over allegations he had raped a former FSU student in December of 2012. Investigators had sat on the case for almost a year, and an attorney for the accuser (who withdrew from school after coming forward) alleged that Tallahassee police had told her to tread carefully, because she was in a “big football town.” The press conference announcing that no charges would be filed was interrupted frequently by laughter from the (mostly male) attendees.

On Friday, the Tampa Bay Times broke down just how lax the Tallahassee Police Department’s investigation really was. After interviewing the accuser in January of 2013, police were presented with a number of obvious sources to follow up with: they knew the bar where she’d been drinking; they knew she’d taken a taxi; and they knew that a football player named “Chris” had walked in on the alleged rape. Among the details:

That last item may be the most damning—there was literally a video of the alleged crime and police never tried to find it.

That’s not to say Winston would have been found guilty. Maybe the leads investigators never followed might have led them to the same conclusion they ultimately drew. But the nature of the investigation made it clear that the odds were stacked against the accuser from the start. It would hardly be the first time.