On Thursday, a freight train derailed in southern Mexico. It wasn’t just any train, though: It was La Bestia—”the Beast”—the infamous train many Central American immigrants ride through Mexico on their way to the United States. When the Beast went off the tracks this week, some 1,300 people who’d been riding on top were stranded in Oaxaca. 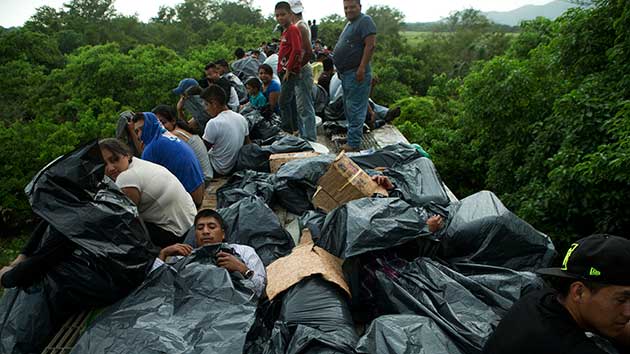 After years of turning a blind eye to what’s happening on La Bestia, the Mexican government claims it now will try to keep migrants off the trains. On Friday, Mexican Interior Secretary Miguel Ángel Osorio Chong said in a radio interview that the time had come to bring order to the rails. “We can’t keep letting them put their lives in danger,” he said. “It’s our responsibility once in our territory. The Beast is for cargo, not passengers.”

The announcement comes on the heels of President Obama’s $3.7 billion emergency appropriations request to deal with the ongoing surge of unaccompanied Central American child migrants arriving at the US-Mexico border. Many Central Americans take the trains to avoid checkpoints throughout Mexico—and the robbers and kidnappers known to prey on migrants. But riding the Beast can be even more perilous. Migrants often must bribe the gangs running the train to board, and even then, the dangers are obvious: Many riders have died falling off the train, or lost limbs after getting caught by its slicing wheels.

Why, though, hasn’t the Mexican government cracked down sooner? Adam Isacson, a regional-security expert at the nonprofit Washington Office on Latin America, says the responsibility of guarding the trains often has fallen to the rail companies—who usually turn around and argue that since the tracks are on government land, it should be the feds’ problem. (Notably, the train line’s concession is explicitly for freight, not passengers.)

In his radio interview, Osorio Chang also signaled a tougher stance against Central American migrants, in general. “Those who don’t have a visa to move through our country,” he said, “will be returned.”