An estimated 15,000–20,000 people showed up for what would be the last public execution in the United States.

Around 5:20 a.m., August 14, 1936, Rainey Bethea was led to the gallows in Owensboro, Kentucky for robbing, raping and murdering Lischia Edwards, a 70 year old woman. Bethea was black, Edwards was white. He confessed to committing the crimes, but was only charged with the rape. Unlike a murder conviction, which would have carried a maximum sentence of death by electrocution at the state penitentiary, a rape conviction allowed for the convicted to be publicly hanged in the county where the crime occurred. 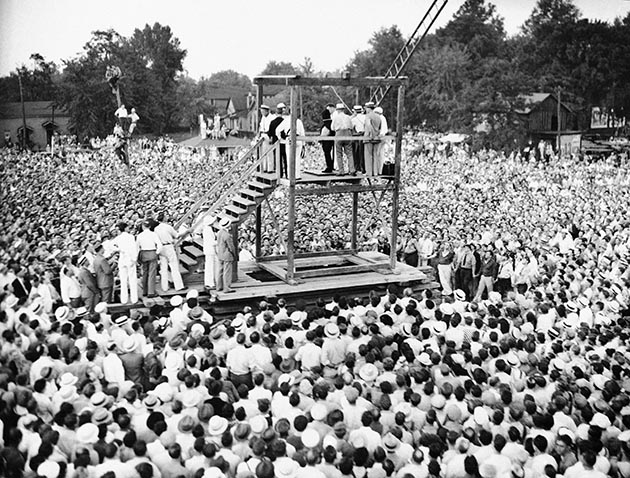 In this Friday, Aug. 14, 1936 file picture, a large crowd watches as attendants adjust a black hood over Rainey Bethea’s head just before his public hanging in Owensboro, Ky. Bethea, a 22-year-old black man convicted of raping a 70-year-old white woman, was the last person killed in a public execution in the United States.  AP

The hanging drew national media attention–largely because the Sheriff of Daviess county was a woman. As Sheriff, Florence Shoemaker Thompson would be responsible for actually hanging Bethea (though she wound up not pushing the lever to the gallows’ trapdoor). The media circus surrounding the hanging prompted the Kentucky General Assembly to amend the law in 1938, no longer required convicted rapists to be hanged in the county seat where the crime occurred.