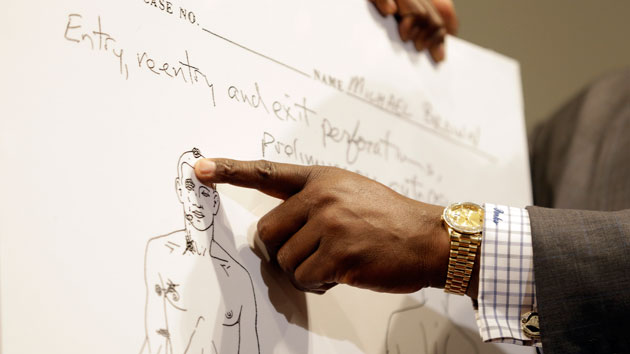 Daryl Parks, one of the Brown family's attorneys, points to a diagram showing the preliminary results of an independent autopsy.Jeff Roberson/AP

Normally, it takes weeks to get the results of an autopsy. But today, St. Louis County medical examiner Mary Case announced that Michael Brown, the unarmed teenager who was killed by a policeman last weekend in Ferguson, Missouri, was shot in the head and chest multiple times. Here’s the information we know about Michael Brown’s death, and a little background on why autopsies usually take so much longer.

What have the autopsies found so far?
Three separate autopsies are in various stages of completion. The St. Louis County medical examiner’s office announced on Monday that Brown was killed by multiple bullets to the chest and head. The office has not yet released information about the number or location of the bullets or their toxicology report. According to a confidential source reporting to the Washington Post, Brown’s toxicology test found that he tested positive for marijuana.

The preliminary results of an independent autopsy arranged by the Brown family and performed on Sunday by former New York City Chief Medical Examiner Michael Baden found that Brown was shot six times: four times in his right arm, and twice in the head. One of the bullets entered the top of Brown’s skull, indicating that his head was tilted forward when the bullet struck him and caused a fatal injury. According to Benjamin Crump, the attorney representing the Browns, the family wanted “an autopsy done by somebody who is objective and who does not have a relationship with the Ferguson police.”

US Attorney General Eric Holder announced on Sunday that the Justice Department would conduct a third autopsy, because of “the extraordinary circumstances involved in this case and at the request of the Brown family.” A department representative said the autopsy would take place “as soon as possible.”

Why does it usually take so long to get autopsy results?
An autopsy itself usually doesn’t take too long, but often, medical examiners will wait to release the results until toxicology tests, which analyze the presence of drugs, are also complete. Toxicology tests usually take several weeks, in part due to the chemistry involved and in part because there’s often a backlog of tests. Coupling the release of the toxicology and autopsy results is standard practice because it gives a more complete picture of what may have happened during the shooting, says Judy Melinek, a forensic pathologist and the author of Working Stiff: The Making of a Medical Examiner. Determining whether or not a person was under the influence of drugs “may help interpret a person’s behavior and reaction time,” she says.

What do toxicology tests entail?
A basic screening often involves using immunoassays to test blood and urine (from inside the body) for drugs, including alcohol, marijuana, and opiates. If a test comes back positive, then a lab will run more complex tests, like mass spectrometry, to determine the exact concentration of the drug. Melinek says that “negative results come back faster,” and “the more drugs found in a person’s system, the longer it takes because each has to be verified and quantitated.” If Brown only tested positive for marijuana, the tests would only take a few days.

Was Brown’s case slowed down by an autopsy backlog?
Autopsy backlogs do exist—last year in Massachusetts, for example, there were nearly 1,000 unfinished death certificates due to lack of qualified pathologists and state funding for toxicology testing. According to Suzanne McCune, a representative of the St. Louis County medical examiner’s office, Brown’s case was expedited through the system, as often happens for cases involving officers.