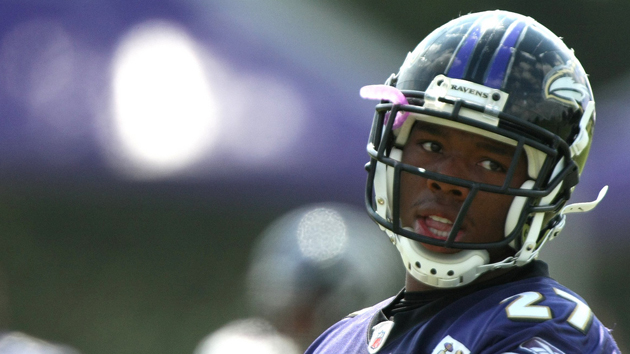 This afternoon, the Baltimore Ravens released running back Ray Rice in response to a video released by TMZ showing Rice knocking his then-fiancée (and current wife) Janay Palmer unconscious in an Atlantic City elevator in February. Rice has been the subject of intense scrutiny since the NFL suspended him for two games—earlier today, it suspended him indefinitely—but some had given the star running back the benefit of the doubt after he claimed he was simply defending himself. (Indeed, both Rice and Palmer were charged with assault following the incident.)

This new footage, though, clearly shows that wasn’t the case, and as outrage mounted today, the Ravens had little choice but to take decisive action against Rice. But we should hardly be praising the team. If anything, the Ravens have been defending Rice and victim-blaming from the very beginning. For example:

1. In May, the Ravens decided it’d be a good idea to sit Rice and Palmer in front of the media and have them publicly address the Atlantic City incident. The result was a complete PR disaster. Rice began by apologizing not to Palmer, but to senior Ravens management and coach John Harbaugh. Rice also chose his words poorly, defining failure as “not getting knocked down, but not getting back up.”

2. Even more tone-deaf than the press conference itself was how the Ravens presented it. The team had a staffer live-tweeting the spectacle, and the team’s official account sent out this unbelievable tweet, straight out of Victim-Blaming 101:

3. After Rice’s two-game suspension was handed down in late July, people were outraged that occasional pot smokers got harsher punishments from the NFL. The Ravens PR machine thought it was the perfect time to start rehabilitating Rice’s image, releasing a glowing dispatch from his first major public appearance after the punishment. The article, posted on the team’s website, says Rice got a “standing ovation” from fans who “showed him a lot of love,” even though he had been under “national scrutiny.” After noting that he showed his “usual fun-loving side,” the piece observed with remarkable subtlety that “Rice jerseys sprinkled the crowd, worn by both males and females.”

The NFL has earned much-deserved flak for toughening its domestic-violence penalties only when the national criticism ramped up. Today’s move by the Ravens should be seen in a similar light: Cutting Rice was the right decision, but it’s clear the organization has never taken his offenses all that seriously. It took an even-worse leaked video to make the Ravens finally act.