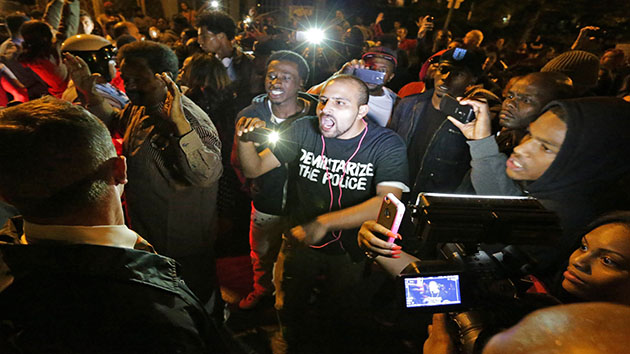 Crowds confront police near the scene in in south St. Louis where a man was fatally shot by an off-duty St. Louis police officer on Wednesday, Oct. 8, 2014. St. Louis. AP/David Carson

Nearly two months to the day after 18-year-old Michael Brown was shot and killed by police in Ferguson, another black teenager was fatally shot by a white officer in nearby St. Louis on Wednesday.

According to police, the yet-to-be named off-duty officer was chasing the teenager, later identified by family as Vonderrick Myers Jr., when the two began firing at each other. Police say Myers got off at least three rounds before the officer returned fire. They also say that a weapon was recovered at the scene, but witnesses including Myers’ family are disputing the police account.

“He was unarmed,” said Teyonna Myers, apparently the victim’s cousin. “He had a sandwich in his hand, and they thought it was a gun. It’s like Michael Brown all over again.”

The officer, a 6-year veteran, fired at Myers 17 times.

Miles from #Ferguson, another young black man has been shot by police: http://t.co/JK5wK6OHRr (Photo by AP) pic.twitter.com/I0kulFgkVO

The latest shooting comes as Ferguson prepares for renewed unrest in the case a grand jury chooses not to indict Darren Wilson, the officer who shot and killed Brown in early August.