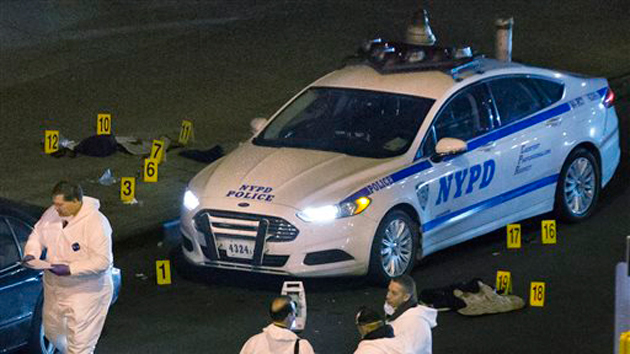 Investigators work at the scene where two NYPD officers were shot in the Bedford-Stuyvesant neighborhood of Brooklyn on Saturday.John Minchillo/AP

As officials continue to investigate Saturday’s tragic killing of two NYPD officers, Wenjian Liu and Rafael Ramos, details have surfaced about the suspect, 28 year old Ismaaiyl Brinsley, who allegedly shot a woman in Baltimore before traveling to New York. Anti-police posts he appears to have published on social media sites prior to the killings have lead many to connect his crime to protests that occurred in previous weeks, and some commenters have cast blame on officials including New York Mayor Bill de Blasio, Attorney General Eric Holder, and President Obama, all of whom have condemned the violence. (Read my colleague Kevin Drum’s response to that.)

But, while every killing of an officer is a tragedy, it is worth noting, as my colleague Shane Bauer reported in the context of another story, assaults and felony killings of police officers in the US are down sharply over the past two decades. Attention has also been focused on Brinsley’s race, but FBI data shows that, though African Americans are arrested and incarcerated at a higher rate than whites, the majority of assailants who feloniously killed police officers in the past year were white.