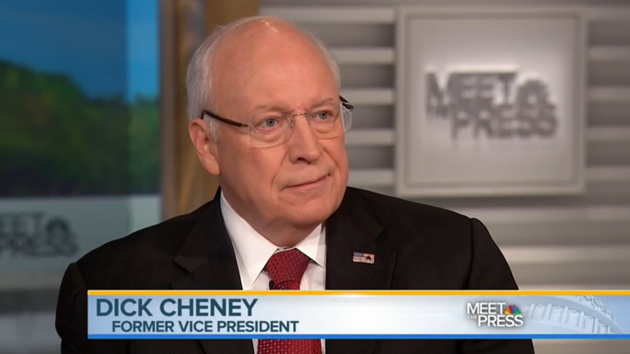 On Sunday, days after the release of the Senate torture report, former Vice President Dick Cheney appeared on Meet the Press to defend the Bush-Cheney administration’s use of harsh interrogation practices and to deny that these methods were torture. It was a typical no-retreat/no-surrender performance by Cheney. Asked by host Chuck Todd to define torture, Cheney repeatedly said torture was what happened on 9/11: “What the Al Qaeda terrorists did to 3,000 Americans.” That is, he defined torture as an act of mass violence that targets civilians.

This was a confusing, nonlogical talking point that Cheney gripped tightly. Yet on the specific matter of waterboarding—which he defended—Cheney simply resorted to false statements. He insisted that waterboarding “was not torture.” Todd asked him, “When you say waterboarding is not torture, then why did we prosecute Japanese soldiers in World War II for waterboarding?”

For a lot of stuff. Not for waterboarding. They did an awful lot of other stuff…To draw some kind of moral equivalent between waterboarding judged by our Justice Department not to be torture and what the Japanese did with the Bataan Death March and the slaughter of thousands of Americans, with the rape of Nanking and all of the other crimes they committed, that’s an outrage. It’s a really cheap shot, Chuck, to even try to draw a parallel between the Japanese who were prosecuted for war crimes after World War II and what we did with waterboarding three individuals—

See what he did there? He denied the basis of Todd’s question and then tried to make it seem silly: You can’t equate what our guys did to the worst mass war crimes of World War II!

But Cheney was wrong. In 1947, the United States did charge a Japanese interrogator named Yukio Asano with war crimes, including waterboarding. In fact, waterboarding was one of the key crimes of which he was accused. Here’s a portion of the indictment:

Charge: That between 1 April, 1943 and 31 August, 1944, at Fukoka Prisoner of War Branch Camp Number 3, Kyushu, Japan, the accused Yukio Asano, then a civilian serving as an interpreter with the Armed Forces of Japan, a nation then at war with the United States of America and its Allies, did violate the Laws and Customs of War.

Specification 1: That in or about July or August, 1943, the accused Yukio Asano, did willfully and unlawfully, brutally mistreat and torture Morris O. Killough, an American Prisoner of War, by beating and kicking him; by fastening him on a stretcher and pouring water up his nostrils.

Other parts of the indictment also refer to other times Asano engaged in waterboarding. He was not indicted for the Bataan Death March. He was accused of a specific war crime: waterboarding.

Does Cheney know this? If he did, it probably wouldn’t matter. During his interview, the ever-unrepentant Cheney refused to acknowledge any problems with the CIA detention and interrogation program that he and George W. Bush approved. He showed no concern when Todd noted that up to 25 percent of the detainees—some of whom were tortured—were wrongly held. Cheney insisted the extreme interrogation practices “absolutely did work,” though the Senate report offers numerous examples of instances when torture did not yield pivotal information and did not contribute to thwarting attacks. Cheney asserted that waterboarding in the defense of the United States is no vice. And he kept thrashing at a straw man, accusing naive torture critics of equating these interrogation methods with the bloody deeds of Al Qaeda.

Asked about a passage of the report that clearly notes that the CIA provided Cheney with false information—that the use of the so-called enhanced interrogation techniques helped the CIA stop a dirty bomb attack planned for Washington, DC—Cheney insisted that the implication that the CIA misled him “is just wrong.” But he didn’t say how he knew that. After all, did Cheney review the intelligence himself? (He didn’t even read the full torture report—or the 528-page executive summary that was released.) And if the CIA had provided him inaccurate information touting the use of these interrogation techniques, how would he know that?

Given that the CIA screwed up regarding WMD in Iraq, Todd asked Cheney, why are you so confident that CIA officials were telling you the truth? Cheney had only this to say: I trusted them. Who’s being naive now?

Finally, Todd asked if Cheney had any regrets about the Iraq War, noting that the invasion has led to chaos in the region. Big surprise: Cheney said no. He repeated the canard that Saddam Hussein “had a 10-year relationship with Al Qaeda.” Once again, the 9/11 Commission found that there was no “collaborative operational relationship” between the Iraqi dictator and Al Qaeda, and the Institute for Defense Analyses, a research arm of the Pentagon’s Joint Forces Command, studied a half million Iraqi documents and concluded there had been no direct connection between Osama bin Laden’s gang and Baghdad.

“We did the right thing,” Cheney told Todd. But for more than a decade now, Cheney has been peddling false information to the American public: Saddam was amassing WMD to use against the United States, Iraq had obtained aluminum tubes so it could create a nuclear weapon, a 9/11 ringleader met with an Iraqi intelligence officer. And now: Torture wasn’t torture, and it worked. After all that—though he’s still afforded elder statesman status by much of the media—he probably deserves derision more than rebuttal.