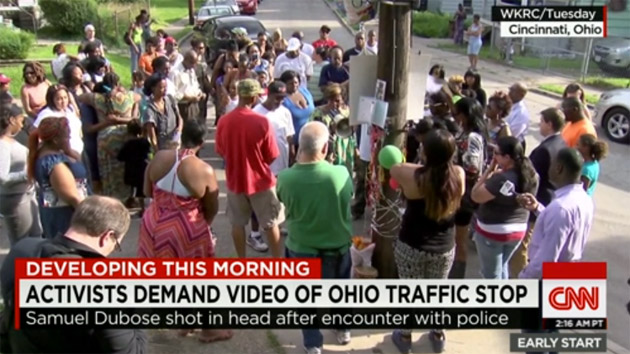 Authorities are still withholding crucial video evidence from the public three days after a deadly confrontation between a campus cop and an unarmed black person in Cincinnati, Ohio. On Sunday night, Ray Tensing, a white University of Cincinnati police officer, stopped 43-year-old Samuel Dubose for driving without a license plate. Police say Tensing asked Dubose for his driver’s license multiple times, before Dubose handed over a bottle of alcohol.

When Tensing asked Dubose to step out of the car, a struggle reportedly ensued. Tensing, who has since been placed on administrative leave, allegedly fired his weapon, shooting Dubose in the head. The Cincinnati Enquirer reports that authorities have so far withheld video footage taken from a body camera and a nearby building while the Hamilton County prosecutor’s office investigates the incident. That video has been turned over to the prosecutor’s office for the probe, which is expected to be completed by the end of the week.

Dubose’s death comes after months of national scrutiny, and widespread protests, over police shootings. More than 500 people have been killed by police so far in 2015, according to a Washington Post analysis. It’s worth noting that the arming of campus police officers has also been on the rise: Seventy-five percent of four-year private and public colleges had armed officers during the 2011-2012 school year, up from 68 percent in 2004-2005, according to the Bureau of Justice Statistics.