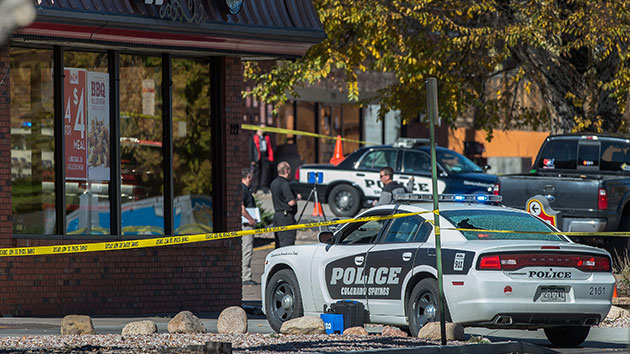 A crime scene in Colorado Springs on October 31.Christian Murdock/The Gazette via AP

Details are continuing to emerge about a gun rampage that took place in the streets of Colorado Springs on Saturday morning, in which 33-year-old Noah Harpham shot three people to death before police killed him in a shootout. On Monday, a troubling detail came to light in a Denver Post report suggesting that police may have had a chance to intervene before the slaughter began—but that a police dispatcher may have reacted without urgency to a 911 call about Harpham because of Colorado’s open carry law:

Witnesses watched in horror as Harpham picked his victims off. One of them, the bicyclist, pleaded for his life before being killed.

“I heard the (young man) say, ‘Don’t shoot me! Don’t shoot me!’ ” Naomi Bettis, a neighbor who witnessed the killing, said Monday.

Bettis said she recognized the gunman as her neighbor—whom she didn’t know by name—and that before the initial slaying she saw him roaming outside with a rifle. She called 911 to report the man, but a dispatcher explained that Colorado has an open carry law that allows public handling of firearms.

“He did have a distraught look on his face,” Bettis said. “It looked like he had a rough couple days or so.”

It’s unclear how much time lapsed between Bettis’ 911 call and when the rampage began, but according to The Gazette the initial police response didn’t come until after the carnage was in progress:

By then, Harpham had killed the bicyclist, 35-year-old Andrew Alan Myers, and two women at a nearby location, 42-year-old Jennifer Michelle Vasquez, and 34-year-old Christina Rose Baccus-Gallela. (Similarly, the Denver Post reported: “Officers were first called on reports of a ‘possible shooting’ at 230 North Prospect Street—a townhouse-like building—where they found the bicyclist dead and a fire burning, the dispatch archives show.”) [Update: A Colorado Springs PD official responds to Mother Jones here about Bettis’ 911 call.]

Proponents of open carry laws argue that the ability for citizens to take firearms with them in public isn’t just a right but makes communities safer. We don’t yet know, but the law allowing guns to be carried on display in Colorado may have just done the opposite.