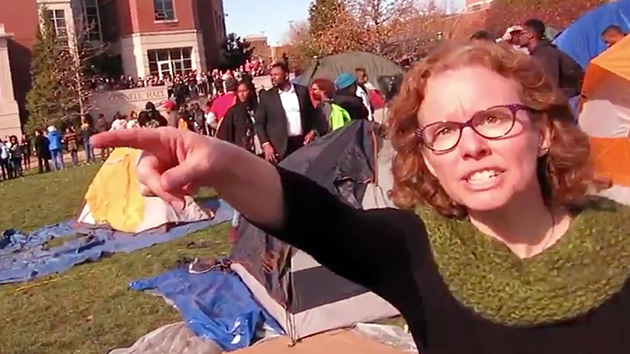 The communications professor who called for “muscle” to block a reporter from covering Monday’s demonstrations at the University of Missouri—a moment captured in a video that went viral—issued an apology on Tuesday evening. In a written statement tweeted by the university’s Department of Communications, Melissa Click—an assistant professor specializing in pop culture and feminism—said she had reached out to the journalists involved “to offer my sincere apologies and to express regret over my actions.” Read her full statement below:

Statement by Melissa Click, Assistant Professor of the Department of Communication, Regarding Carnahan Quad Protests pic.twitter.com/FJPUJUL5b3

Click became the center of a firestorm after a video clip was posted online showing a confrontation between a group of students and a freelance photographer working for ESPN, Tim Tai. Protesters had assembled after Tim Wolfe, the president of the University of Missouri system, resigned from his post on Monday amid growing furor over a series of racial incidents at the system’s flagship Columbia campus. In the video, students argued with Tai, who was trying to take photographs, and chanted, “Hey hey, ho ho, reporters have got to go.” At the end of the video, Click puts her hand in the lens of the camera filming her, and then calls for help from students to expel reporters. In a longer clip posted later, Click can be seen rallying students to prevent the media from reaching the quad, where a mini tent-city had been erected by protestors. In the wake of the viral video, Click made her Twitter account private and went to ground, apparently enduring rape and death threats.

The showdown between protestors and the press at the University of Missouri has since become a subject of national debate. In the meantime, the dean of the university’s famous journalism school, David Kurpius, defended Tai, a senior at the university, by saying the incident provided “an opportunity to educate students and citizens about the role of a free press.”