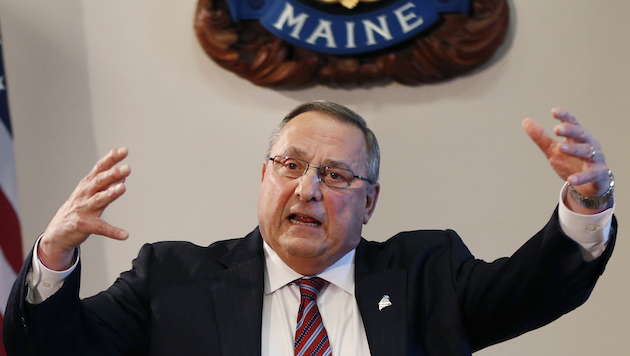 Adding to his impressive record for unpredictable, oftentimes offensive statements, Maine Republican Gov. Paul LePage on Tuesday suggested the state bring back the use of guillotines to publicly execute drug traffickers.

“I think the death penalty should be appropriate for people who kill Mainers,” LePage said during his weekly radio address on WVOM.  “We should give them an injection of the stuff they sell.”

As the host attempted to wrap up the interview, LePage went further.

“What we ought to do is bring the guillotine back.”

This isn’t the first time LePage has called for punishment in the form of public executions. In June, LePage allegedly told a local developer that state lawmakers should be “rounded up and executed in the public square.”

Tuesday’s bizarre guillotine endorsement comes just weeks after he made racially charged remarks at a town hall event, warning residents about out-of-state drug dealers with names like “D-Money” and “Smoothie.” LePage said these drug dealers come to Maine, where state officials are grappling with a growing heroin epidemic, to sell narcotics and to impregnate young white women.

Those controversial comments sparked national outrage, but LePage dismissed accusations that his comments were racist and blamed the media for the backlash.