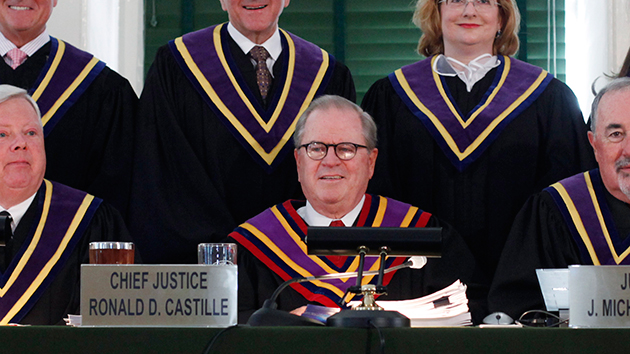 The US Supreme Court heard arguments last week as to whether Ronald D. Castille, a former chief justice of the Pennsylvania Supreme Court, should have stepped aside from considering the appeal of a death penalty case he personally greenlighted when he was Philadelphia’s district attorney.

It seems pretty obvious, doesn’t it? “He made the most important decision that could be made in this case,” Justice Elena Kagan commented during oral arguments.

Castille didn’t think so. Back in 2012, public defenders for Terrence Williams—who was convicted and sentenced to death at age 18 for murdering a 56-year-old named Amos Norwood—asked Castille to step aside because he oversaw the prosecutors who handled the case. The judge explained to the New York Times that he was merely functioning as an administrator. “I didn’t try the case,” he said, according to the paper. “I wasn’t really involved in the case except as the leader of the office.”

But Castille had additional baggage that raise questions about his involvement.

An appeals judge found that Andrea Foulkes, the prosecutor who tried Williams on Castille’s watch, had deliberately withheld key evidence from the defense—and thereby the jury. Norwood, the victim, had started a relationship with Williams when the boy was 13 and abused him, sexually and otherwise, for years. Although the details weren’t known at the time, the prosecution suppressed trial evidence suggesting Norwood had an unnatural interest in underage boys.

Williams had previously killed another older man he’d been having sex with—51-year-old Herbert Hamilton. (Williams was 17 at the time of the crime.) The jury in that case, presented with evidence of their relationship, voted against the death penalty and convicted Williams of third-degree murder, a lesser charge. But Foulkes, who prosecuted both cases, told the Norwood jury that Williams had killed Norwood “for no other reason but that a kind man offered him a ride home.”

So there’s that. And then, as death penalty appeals lawyer Marc Bookman points out in an in-depth examination of the Williams prosecutions for Mother Jones, Castille was a big fan of the death penalty:

In the five years before the Williams case came onto its docket, the court, led by Chief Justice Ronald Castille, had ruled in favor of the death penalty 90 percent of the time. This wasn’t too surprising, given that Castille had been elected to his judgeship in 1993 as the law-and-order alternative to a candidate he labeled soft on crime…

“Castille and his prosecutors sent 45 people to death row during their tenure, accounting for more than a quarter of the state’s death row population,” the Pittsburgh Post-Gazette noted in 1993. “Castille wears the statistic as a badge. And he is running for the high court as if it were exclusively the state’s chief criminal court rather than a forum for a broad range of legal issues.” Castille was pretty clear about where he stood: “You ask people to vote for you, they want to know where you stand on the death penalty,” he told the Legal Intelligencer, a law journal. “I can certainly say I sent 45 people to death row as District Attorney of Philadelphia. They sort of get the hint.”

Castille also had it out for Williams’ defenders, with whom his old office was at odds. Bookman again:

Castille had a fraught relationship with the Federal Community Defender Office, a group of lawyers who represent numerous death row inmates, including Williams. Castille claimed that federal lawyers had no business appearing in state courts. He complained bitterly over the years about their “prolix and abusive pleadings” and about all the resources they dedicated to defending death row inmates—”something one would expect in major litigation involving large law firms.”

The defenders, for their part, routinely filed motions arguing that Castille had no business ruling on the appeals of prisoners whose prosecutions he had approved—particularly not in a case in which his office was found to have suppressed evidence helpful to the defense. But as chief justice, Castille had the last word. He denied all such motions, and accused the federal defenders of writing “scurrilously,” making “scandalous misrepresentations,” and having a “perverse worldview.”

It’s not too hard to predict which way the Supreme Court will rule—although whether their decision helps Williams get a resentencing is another matter. America’s justice system makes it unbelievably hard to get a second chance once you are convicted of a serious crime.

But all of this brings up a broader, question: Prosecutors like Castille are appointed to the bench in far greater numbers than former defenders—even President Barack Obama has perpetuated this trend. Which is why it was so worthy of note that California Gov. Jerry Brown, under federal pressure to reduce incarceration in the Golden State, has broken with his predecessors and moved in the other direction. Northern California public station KQED recently pointed out that more than a quarter of Brown’s 309 judicial appointments have been former public defenders, whereas only 14 percent were once DAs. (31 percent had some prosecutorial experience.) From that report:

“We never had a tradition that said to be a judge you had to be a district attorney. That developed probably in the ’90s,” Brown said. “The judges are supposed to be independent. You want judges that have a commercial background, you want judges that have a prosecutorial background, city attorneys, or county counsel, or small practice, plaintiffs’ practice—you want a diversity, instead of kind of a one note fits all.”

When it comes down to it, politicians are still eager to appear tough on crime. But is it really good policy—financially or ethically—to stack the bench with judges who are accustomed to being rated according to the number of people they lock away?

“Most district attorney judges that I’ve experienced are unable to divorce themselves from their background once they become a judge,” Michael Ogul, president of the California Public Defenders Association, told KQED. “They are still trying to help the prosecution, they are still trying to move the case toward conviction or toward a harsher punishment.”