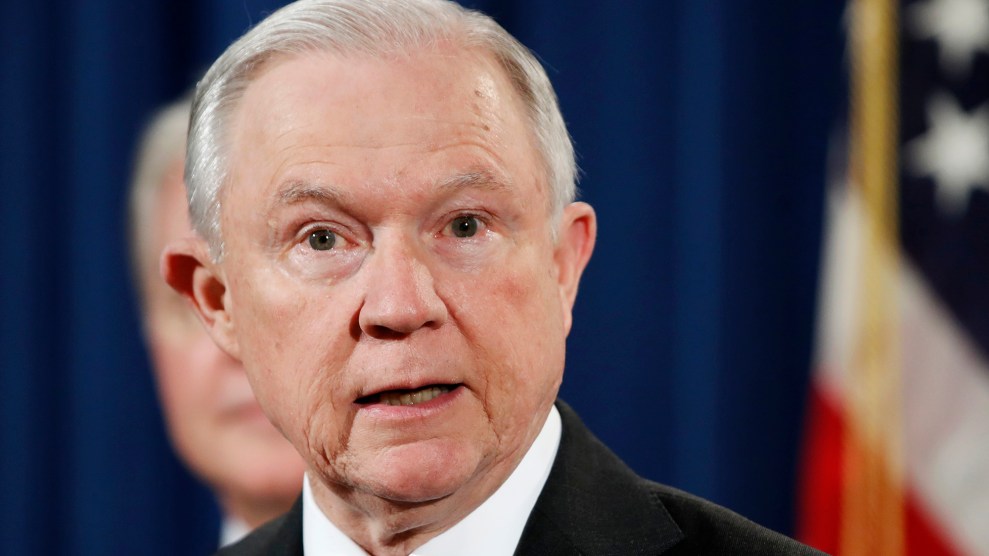 On Tuesday, Attorney General Jeff Sessions came under fire for giving a closed-door speech at a summit organized by a religious freedom group known for advocating anti-LGBT policies. The group, Alliance Defending Freedom, has a legal case in front of the Supreme Court right now—it’s representing a Colorado baker who refused to make a wedding cake for a same-sex couple. It has also worked to bar transgender people from bathrooms of their choice, and it has promoted anti-sodomy laws in the United States and abroad.

The event was not open to the press, and the Justice Department later declined to release a transcript of Sessions’ remarks. But on Thursday, the Federalist, a conservative media outlet, published the full speech, in which the attorney general pledged to defend religious freedom. “In all of this litigation and debate, this Department of Justice will never allow this secular government of ours to demand that sincere religious beliefs be abandoned,” he said. Read the whole thing below:

Thank you for that introduction. And thank you for the important work that you do every day to uphold and protect the right to religious liberty in this country. This is especially needed today.

While your clients vary from pastors to nuns to geologists, all of us benefit from your good work—because religious liberty and respect for religion have strengthened this country from the beginning. In fact, it was largely in order to enjoy and protect these rights that this country was settled and founded in the first place, as those in this room especially know.

Our Founders wisely recognized that religion is not an accident of history or a passing circumstance. It is at the core of the human experience, and as close to a universal phenomenon as any. Each one of us considers with awe the stars in the sky and at the moral code within our hearts. Even today, in a rapidly changing world, a majority of the American people tell Gallup that religion is “very important” in their lives.

With this insight into human nature, they took care to reserve a permanent space for freedom of religion in America. That space is the very first line of the Bill of Rights.

And not just that line. Twelve of the 13 colonies authored state constitutions that protected the free exercise of religion. Six of the original 13 states had established churches, but almost every state made accommodations for religious minorities like Quakers or Mennonites. They did not insist that all follow the same doctrines. Every state constitution at the time of our founding—and now—mentions God.

Our first president, George Washington, called for a national day of prayer. And he wrote to a Jewish congregation in Rhode Island that in America, “all possess alike liberty of conscience.”

In his farewell address, President Washington famously called religion the “indispensable support of political prosperity [and a] great pillar of human happiness.” He warned, “Let us with caution indulge the supposition that morality can be maintained without religion…Reason and experience both forbid us to expect that national morality can prevail in exclusion of religious principle.”

And Thomas Jefferson did not mention on his tombstone that he had served as president. He named three accomplishments: that he had founded the University of Virginia, authored the Declaration of Independence, and authored the statute of religious freedom in Virginia.

This national commitment to religious freedom has continued throughout our history, and it has remained just as important to our prosperity and unity ever since. When Alexis de Tocqueville visited this country, he noted “in France I had almost always seen the spirit of religion and the spirit of freedom marching in opposite directions. But in America I found they were intimately united and that they reigned in common over the same country.”

And of course it was faith that inspired Martin Luther King Jr. to march and strive to make this country stronger yet. His was a religious movement. The faith that truth would overcome. He said that we “must not seek to solve the problem” of segregation merely for political reasons, but “in the final analysis, we must get rid of segregation because it is sinful.” It undermined the promise, as he described it, that “each individual has certain basic rights that are neither derived from nor conferred by the state…they are gifts from the hands of the Almighty God.”

So our freedom as citizens has always been inextricably linked with our religious freedom as a people. It has protected both the freedom to worship and the freedom not to believe as well.

To an amazing degree, the value of religion is totally missed by many today. Our inside-the-beltway crowd has no idea how much good is being done in this country every day by our faith communities. They teach right behavior, they give purpose to life, and they support order, lawfulness, and personal discipline while comforting the sick, supporting families, and giving support to those in need. They are there at birth and death.

But the cultural climate has become less hospitable to people of faith and to religious belief. And in recent years, many Americans have felt that their freedom to practice their faith has been under attack. This feeling is understandable. Just last year, a Harvard Law professor publicly urged judges to “take aggressively liberal positions…The culture wars are over. They lost; we won…Taking a hard line is better than trying to accommodate the losers.”

A lot of people are concerned about what this changing cultural climate means for the future of religious liberty in this country. The challenges our nation faces today concerning our historic First Amendment right to the “free exercise” of our faith have become acute. I believe that this recent election was significantly impacted by this concern and that this motivated many voters. President Trump made a promise that was heard. In substance, he said he respected people of faith and he promised to protect them in the free exercise of their faith. This promise was well received.

How, then, should we deal with this matter? America has never thought itself to be a theocracy. Our founders, at least the most articulate of them, believed our government existed as a protector of religious rights of Americans that were essential to being a created human being.

The government did not exist to promote religious doctrine nor to take sides in religious disputes that had, as they well knew, caused wars and death in Europe. Nor was it the government’s role to immanetize the eschaton, as Bill Buckley reminded us. The government’s role was to provide the great secular structure that would protect the rights of all citizens to fulfill their duty to relate to God as their conscience dictated and to guarantee the citizen’s right to exercise that faith.

The government would not take sides, and would not get between God and man. Religious rights were natural rights, not subject to government infringement, as the Virginia Assembly once eloquently declared.

Our freedom as citizens has always been inextricably linked with our religious freedom as a people.

Any review of our nation’s policies must understand this powerful constraint on our government and recognize its soundness. Yet this understanding in no way can be held to contend that government should be hostile to people of faith and is obligated to deprive public life of all religious expression.

In all of this litigation and debate, this Department of Justice will never allow this secular government of ours to demand that sincere religious beliefs be abandoned. We will not require American citizens to give intellectual assent to doctrines that are contrary to their religious beliefs. And they must be allowed to exercise those beliefs as the First Amendment guarantees.

We will defend freedom of conscience resolutely. That is inalienable. That is our heritage.

Since he was elected, President Trump has been an unwavering defender of religious liberty. He has promised that under a Trump Administration, “the federal government will never, ever penalize any person for their protected religious beliefs.” And he is fulfilling that promise. First, President Trump appointed an outstanding Supreme Court justice with a track record of applying the law as written, Neil Gorsuch. I have confidence that he will be faithful to the full meaning of the First Amendment and protect the rights of all Americans.

This understanding in no way can be held to contend that government should be hostile to people of faith and is obligated to deprive public life of all religious expression.

The president has also directed me to issue guidance on how to apply federal religious liberty protections. The department is finalizing this guidance, and I will soon issue it.

The guidance will also help agencies follow the Religious Freedom Restoration Act. Congress enacted RFRA so that, if the federal government imposes a burden on somebody’s religious practice, it had better have a compelling reason. That is a demanding standard, and it’s the law of the land. We will follow it just as faithfully as we follow every other federal law. If we’re going to ensure that religious liberty is adequately protected and our country remains free, then we must ensure that RFRA is followed.

Under this administration, religious Americans will be treated neither as an afterthought nor as a problem to be managed. The federal government will actively find ways to accommodate people of all faiths. The protections enshrined in the Constitution and our laws protect all Americans, including when we work together, speak in the public square, and when we interact with our government. We don’t waive our constitutional rights when we participate fully in public life and civic society.

This administration, and the upcoming guidance, will be animated by that same American view that has led us for 241 years: that every American has a right to believe, worship, and exercise their faith in the public square. It has served this country well, and it has made us not only one of the tolerant countries in the world, it has also helped make us the freest and most generous. Thank you.