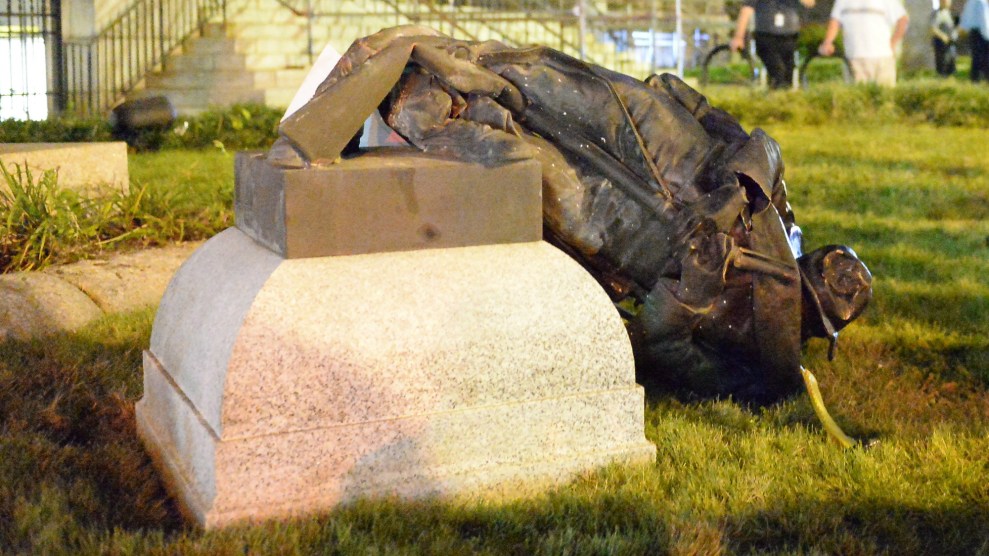 On August 14, protesters toppled the statue of a uniformed Confederate soldier that stood in front of the old courthouse in Durham, North Carolina. Fabian Radulescu/ZUMA

In the wake of the deadly violence in Charlottesville, Virginia, images of Confederate monuments being pulled from their platforms have taken off on social media. But no image stands out as strongly as that of the statue of a Confederate solider in Durham, North Carolina, collapsed in a crumpled heap after being torn down by a group of protesters on Monday. Now, days after the monument was ripped from its base, several protesters are facing charges, and local law enforcement says that more arrests could be on the way.

Eight arrests already have been made in connection to the destruction of the 15-foot monument dedicated to “the boys who wore the gray,” which has stood in front of the former Durham Courthouse for some 90 years. Takiyah Thompson, the person who tied a rope around the bronze figure that was then used to pull it down, told Democracy Now the day after her arrest that “the statue is a symbol of white nationalism.” She later added that “anything that emboldens those people and anything that gives those people pride needs to be crushed.”

On Tuesday, Thompson a 22-year-old student at the historically black North Carolina Central University spoke at a press conference led by the Workers World Party, one of the protest organizers and a group dedicated to “fighting for a socialist revolution in the United States and around the world.”

“The statue is where it belongs—it needs to be in the garbage,” Thompson said to those gathered, who demanded that all charges against those who toppled the statue be dropped. “Every Confederate statue and every vestige of white supremacy has to go.” After she spoke, Thompson was arrested by the Durham Sheriff’s Department and released that evening.

Two more protesters, identified in news reports as Dante Emmanuel Strobino, 35, and Ngoc Loan Tran, 24, were arrested Wednesday morning at the Durham courthouse. A fourth person, Peter Gilbert, 39, was arrested later that day. Four additional arrests were made Thursday morning after a large group of activists and local supporters descended on the Durham courthouse to show their support for those who have been arrested, and many others lined up to turn themselves in to authorities in a show of solidarity.

Walking in to sheriffs office to collectively turn ourselves to say: targeting racial justice organizers? arrest me too! pic.twitter.com/YtTTDEQv20

Want to make sure you all saw this photo. It's the line of people in Durham waiting to turn themselves in for toppling the Confed statue. pic.twitter.com/2SNtWuoR64

According to a statement issued today by the Durham Sheriff’s Department, those who were arrested have been charged with felonies for inciting a riot and participating in a riot with damage in excess of $1,500, as well as three misdemeanors: injury to personal property, injury to real property, and the defacement of a public monument. Activists have been encouraging people to donate to a legal fund set up to assist those who have been arrested and are asking that people call the sheriff’s office and demand that the charges against the protesters be dropped. Their cause may have support among some elected officials. Durham City Council member Charlie Reece told a reporter on Thursday that he thought the felony charges were unwarranted.

Reports have noted that law enforcement was present at Monday’s protest and took videos, which are now being used to identify protesters. A spokeswoman for the department confirmed this in an emailed statement to Mother Jones, adding that investigators are also using “photos, and tips from the community.” A news release issued on Thursday says that “additional arrests are possible.”

In many ways, Monday’s protest was a direct response to the turbulent events in Charlottesville. But local organizers describe the event as part of a broader movement that activists—many of them young queer and trans people of color—have advanced in the region. Several have previously protested police violence, the detention and deportation of undocumented immigrants, and the passage of HB2, a controversial North Carolina law that prevented counties and cities from passing nondiscrimination ordinances and barred transgender people from using public bathrooms that match their gender identity. “We were making a demand and standing up not only to make sure that these visible monuments of white supremacy be removed, but also the less visible institutions and structures that create white supremacy,” Qasima “Q” Wideman, an activist and Workers World Party member who attended Monday’s demonstration, tells Mother Jones.

Confederate statues have long been a point of contention in North Carolina, where more than 95 monuments honor the Confederacy, and a law prevents them from being removed without an act of the state Legislature. One of the most prominent has been Silent Sam, a statue that has stood on the University of North Carolina at Chapel Hill campus since 1913 and has faced a significant amount of attention in recent years. (Activists covered the statue with a black hood during a Sunday protest.) The law was passed in 2015, shortly after a white supremacist killed nine black parishioners at Emanuel African Methodist Church in Charleston, South Carolina. North Carolina Gov. Roy Cooper, a Democrat, who had previously tweeted that “there’s a better way to remove these monuments,” said earlier this week that the law should be repealed and that the monuments “should come down.”

“We showed Gov. Roy Cooper that, if he didn’t take action, we would,” Tran told reporters shortly after being released Wednesday. “So, to Roy Cooper, we say, ‘You’re welcome,’ because it wasn’t his original idea to take down these statues.”

Wideman agrees, “I think we pulled it off a lot more cheaply than he would have.”