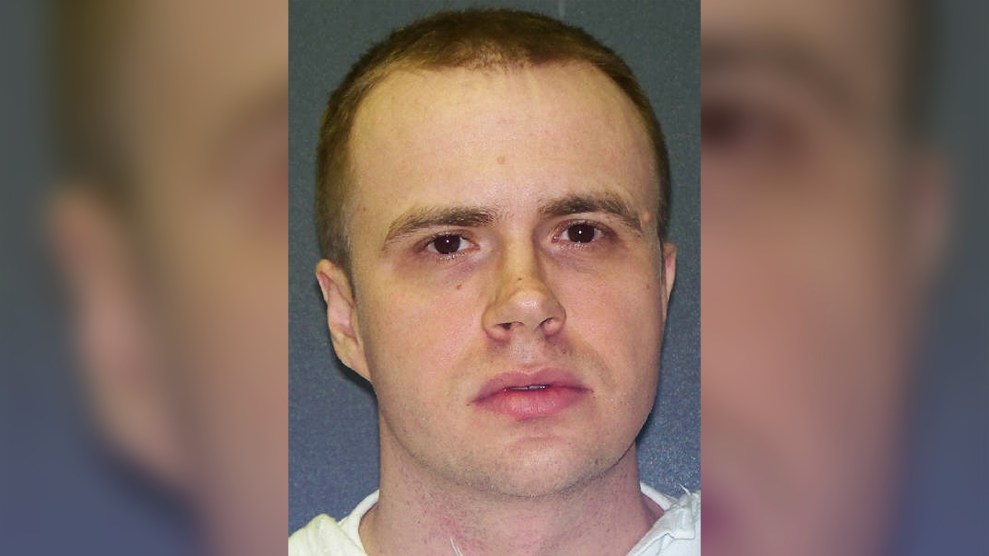 Robert Pruett is scheduled to be executed in Texas on October 12, despite the fact that there is no physical evidence linking him to the crime he was convicted of. Pruett, who is 38-years-old, was sentenced to death after he was convicted of the 1999 murder of Daniel Nagle, a correctional officer at the McConnell Unit in Beeville, Texas. Pruett was already serving a 99-year sentence for being an accomplice to a murder his father committed. Pruett’s execution date has been put off twice before, but there are few legal maneuvers remaining that could delay his death sentence ahead of October 12.

Pruett, who has now spent more than half his life behind bars, led a rough life before he ended up on death row. As a child, his parents and other family members repeatedly abused him, physically and sexually. At the urging of his parents, he began using marijuana and cocaine in elementary school. The Pruett family lived in abject poverty, cycling between apartments that they would get quickly evicted from and sleeping outside. For food, they rummaged through dumpsters and bathed using water hoses outside of restaurants.

In 1995, Pruett got into a verbal fight with his neighbor, Ray Yarbrough. When Pruett’s father, Sam Pruett, returned home that evening, Yarbrough began screaming at the trailer the Pruetts were living in. Pruett, his older brother Steven, and his father went outside and the brothers watched as their father stabbed Yarbrough to death. Sam Pruett was sentenced to life. Steven Pruett received 40 years and Pruett was sentenced to 99 years—effectively a life sentence. He was just 15 years old. Texas’ “Law of Parties” allowed anyone involved in a crime to be sentenced as if they committed the crime themselves.

“In a lot of cases where there’s no physical evidence that directly ties the defendant to the crime scene, [the prosecution] will find experts who fit their theory of the crime.”

In late 1999, four years into his prison sentence, Pruett was accused of stabbing Officer Nagle to death at the McConnell Unit, a medium-sized prison in a small town near Corpus Christi. The day of the murder, Nagle had written up Pruett in a disciplinary report because Pruett tried to eat his sack lunch in an area that wasn’t authorized for eating. Nagle was discovered with a bloody shank and Pruett’s torn up disciplinary report next to his body. While Pruett had a pending disciplinary case related to gambling, he did not have a history of violence.

No witnesses immediately came forward and two years passed between the original indictment and the trial. “People’s stories can change many, many times” in a long period of time, says Kristin Houlé, the executive director of the Texas Coalition to Abolish the Death Penalty, about the witnesses who eventually came forward.

“The State was not able to discover any physical evidence that connected Robert to Officer Nagle’s murder,” Pruett’s lawyers wrote in his petition for clemency in September. “Such evidence simply does not exist.”

At trial, the state claimed that Pruett’s cellmate, who worked in the prison’s craft shop, gave Pruett tape that he used to wrap around the handle of the shank. The state relied on the testimony of Lisa Baylor, a forensic analyst who testified, using a now-debunked scientific method called “physical matching,” that the tape came from the craft shop. “In a lot of cases where there’s no physical evidence that directly ties the defendant to the crime scene, [the prosecution] will find experts who fit their theory of the crime,” Houlé says. And although the expert testified that the tape is a match, there’s nothing to match Pruett to the tape. “No fingerprint and no cells,” said Houlé.

In the clemency petition, Pruett’s lawyers write that DNA testing of the murder weapon in 2015 found DNA that didn’t match either Pruett or the victim. Perhaps, Pruett’s lawyers write, it might belong “to the person that killed Nagle.” The state has not yet responded to Pruett’s petition. Typically, the parole board responds within a few days of the execution.

The prosecution in Pruett case’s relied heavily on testimony from the defendant’s fellow inmates. But, unbeknownst to the defense and the jury, the state had made promises to inmates who testified against Pruett.

According to the clemency petition, which contains the state investigator’s notes, one of the state’s key witnesses, Harold Mitchell, was told that if he testified against Pruett he’d be transferred to a prison in Virginia, where his family lived. And if he didn’t testify, Mitchell would be charged with Nagle’s murder. Mitchell later told his brother that he felt guilty for testifying against Pruett. “If the jury knew that these inmates gained something in exchange for testifying against Pruett—in many cases, significantly more than was disclosed at trial,” Pruett’s lawyers wrote in the petition, “it is likely they would not have believed their testimony.”

It’s not only the lack of physical evidence or bribed witnesses that concerns Pruett’s lawyers. The prison that housed Pruett before he was sent to death row was rife with problems, such as staffing shortages and corruption. One month before Nagle was murdered, according to the Texas Observer, his name was discovered on a secret note from one inmate to another indicating that a prison gang wanted the officer dead. According to the clemency petition, in addition to raising alarm about the staffing shortage, Nagle was working to identify corrupt correctional officers who used the fact that they were often working alone to help prison gangs launder drug money.

Two weeks before his death, Nagle, who was the leader of the local AFSCME union, went to a rally in Austin to ask the Texas legislature to fix the shortage. “Someone will have to be killed before the Texas Department of Criminal Justice does anything about the shortage of staff in Texas prisons,” he said, ominously. The same day Pruett was indicted, four correctional officers were indicted on federal bribery charges for participating in a drug smuggling ring.

Pruett was convicted and sentenced to death in 2002. In 2013,  he was scheduled for execution but a judge withdrew the order after his legal team began requesting DNA testing on the torn disciplinary report. The results were declared inconclusive by the court, and Pruett was given an April 2015 execution date.

A state judge halted the execution so more DNA testing on the murder weapon could be performed. In August 2016, before his scheduled execution, a state court ruled that it needed more time to review Pruett’s further claims about DNA evidence. Last April, an appeals court ruled that the outcome of the trial wouldn’t have changed even if the new DNA evidence had been available.

Pruett’s case is not an anomaly in Texas. Larry Swearingen, a 46-year-old man, is on death row for the 1998 murder of Melissa Trotter. Swearingen maintains his innocence, while the state refuses to conduct additional DNA testing. Instead, the prosecution relied on a forensic analyst who lined up the pantyhose that was used to strangle Trotter and hosiery from the Swearingen home and determined the two pieces were a match. According to court documents, the DNA from the blood found underneath the victim’s fingernails did not match Swearingen. He is scheduled to die on November 16.

Texas is a leader in capital punishment. Between 1976 and 2016, the Lone Star State has executed more than 500 inmates. The last prisoner to receive a reprieve was Kenneth Foster in 2007, who was sentenced to death under the same Law of Parties that sent Pruett to prison. His sentence was changed to life in prison by then-Gov. Rick Perry. The state’s current governor, Republican Greg Abbott, has presided over 25 executions since taking office in January 2015. Abbott has not commuted a single death sentence.