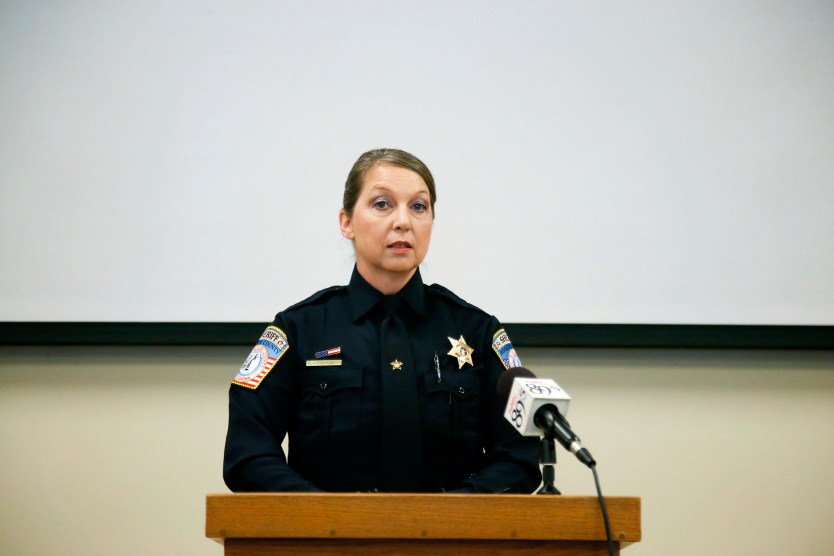 Former Tulsa police officer Betty Shelby after her swearing in as a reserve deputy for the Rogers County Sheriff's Department.Jessie Wardarski/Tulsa World via AP

Former Tulsa, Oklahoma, police officer Betty Shelby scored a second legal win last week, when a judge agreed to remove from the public record all documents related to her trial in the shooting death of 43-year-old Terrance Crutcher. Shelby was acquitted in May of manslaughter charges stemming from an encounter with Crutcher in September 2016.

Video footage showed her shoot Crutcher, whose car was stalled in the middle of the highway, as he backed away from her and other officers who were trying to engage him. Attorneys for Shelby argued in court that she shot Crutcher after he attempted to reach into an open car window. (A toxicology test found traces of PCP in Crutcher’s system.)

Under Oklahoma law, the judge’s decision to expunge her record means Shelby can legally deny she was ever arrested or prosecuted for the shooting, and all records related to the incident will remain under court seal. I talked to Tulsa civil rights attorney J. Spencer Bryan and criminal defense attorney Bob Wyatt to further discuss the law and its implications in such cases.

Under state law, anyone prosecuted for but acquitted of a crime can petition a judge to have the case wiped from their record. If a judge is convinced that a person’s privacy or other interests outweigh the public benefit of reviewing the materials in question, he or she can order that all or part of the court filings be sealed. (Only the prosecuting district attorney’s office would have a copy of those documents.)

The expunged court records are retained for 10 years, after which they may be destroyed. Only a judge can grant access to an outside party, such as a police agency, a news outlet, or a prosecutor from another county. “It essentially makes it as if it never happened,” Bryan says. “It won’t appear on the docket. You can’t go find it. You can’t pull any documents from it. You can’t look to see when things were even filed. The entirety of the case file would be placed under seal and locked away never to be seen again.”

I searched for Shelby’s case in Tulsa County’s courts database and found nothing. Now, if asked about Shelby’s arrest and prosecution, the Tulsa police and Tulsa County prosecutor’s office will be obligated to deny it ever happened.

Will the shooting follow her to her next police gig?

That depends where she goes. Police agencies in Oklahoma will still have access to Shelby’s arrest record, but not her court file. Whether out-of-state agencies can see she was arrested depends on whether the data was put into the FBI’s national database, says Shelby’s attorney, Shannon McMurray. State and local authorities cannot share the information, though, and Shelby’s arrest and prosecution won’t appear in court records searches or a criminal background checks, Wyatt says. So a prospective police employer outside the state would have to rely on Shelby and her attorneys for information.

A few weeks after retiring from the Tulsa PD, Shelby took a volunteer gig at the Roger’s County Sheriff’s Office—that was in August, the same month a Washington Post special investigation found that, since 2006, more than 450 officers fired for misconduct have been reinstated or hired by other police departments. Expungements in use-of-force cases, Bryan says, facilitate such transitions.

Could the Crutcher shooting be used against Shelby in future court proceedings?

Only if they are in Tulsa County. If Shelby were to be charged with a crime while working at a department elsewhere, even if the prosecutor could get a judge to grant access to the records, the trial judge would almost certainly not let a jury see them, Bryan says: “It just adds another layer of hiding an officer’s history from the public.” An individual or an attorney pursuing a civil rights claim against Shelby (as Crutcher’s family is) faces the same obstacles.

How often does this happen?

Bryan says this is the first he’s heard of an officer seeking an expungement after being acquitted of a crime in Oklahoma, but he’s “sure” cops have done it in lower-profile cases. Most states have a process whereby criminal defendants who have been acquitted, had a case dismissed, or have completed probation can have their record expunged, he says.

What about when an officer’s use of force is deemed justifiable by an internal review? Are those records available?

Generally, no. In Tulsa, “if there was information contained in the police file, you wouldn’t be able to get it unless you filed a lawsuit and then subpoenaed those records or requested them,” Bryan told me. Many police departments have rules built into their union contracts or in a separate police “bill of rights” that limit public access to internal records about officers. Some union contracts also mandate that all records related to investigations of an officer be destroyed after a certain number of years. So cops whose misconduct never makes it to court are already shielded from public scrutiny.

Some officers facing internal disciplinary reviews have simply quit and joined another department before their superiors could issue any decision against them (thereby keeping their record clean). Such was the case with Timothy Loehmann, who as a Cleveland police officer shot 12-year-old Tamir Rice in 2014. Loehmann had left his previous job after his superiors initiated a process to fire him for poor performance. When he joined the Cleveland PD, he neglected to disclose the earlier review on his application.

Of course, and they’ll find tons of media reports. But the details will be harder to verify now. And a search might not be as fruitful for an officer whose misconduct was not widely covered, Bryan says. Google can potentially tell you that an incident occurred, but it won’t give you access to any sealed court documents.

Correction: This story has been revised and corrected to better reflect what Shelby must disclose about the case and who has access to her expunged files.